Honorary degrees will also go to scholars in the arts, education, and sciences. 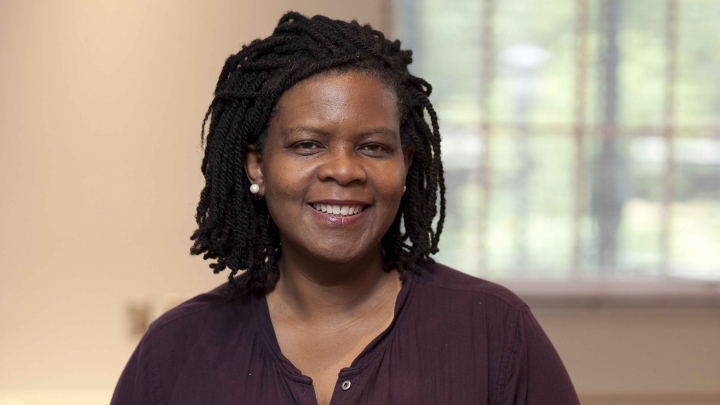 The Pulitzer Prize-winning historian, law scholar, and MacArthur Fellow will deliver the main address and receive an honorary degree at the June 13 ceremony. Honorary degrees will also go to scholars in the arts, education, and sciences.
5/10/2021
Body

Annette Gordon-Reed ’81, a law scholar, MacArthur Fellow, and Pulitzer Prize-winning historian, will deliver the main address and receive an honorary degree at Dartmouth’s 2021 commencement in Memorial Stadium, which starts at 11 a.m. on June 13.

“We are honored to have Annette Gordon-Reed as our commencement speaker this year,” says President Philip J. Hanlon ’77. “With her groundbreaking scholarship, she joins a cohort of prominent honorary degree recipients whose work in the arts, economics, education, and science is transforming our world for the better.”

Gordon-Reed is the Carl M. Loeb University Professor and a professor of history at Harvard University. She has won 16 literary prizes for her work, which explores subjects such as race and slavery in the early American republic, the public and private life of Thomas Jefferson, and the ramifications of President Andrew Johnson’s legacy.

In 2008, Gordon-Reed was awarded the National Book Award, followed by the Pulitzer Prize in History in 2009, for The Hemingses of Monticello: An American Family. Her most recent book, On Juneteenth, weaves together memoir and the history of Texas.

Gordon-Reed’s honors also include a fellowship from the Dorothy and Lewis B. Cullman Center for Scholars and Writers at the New York Public Library, a Guggenheim Fellowship in the humanities, the National Humanities Medal, the Frederick Douglass Book Prize, the George Washington Book Prize, and the Anisfeld-Wolf Book Prize. She is a fellow of the American Academy of Arts and Sciences and a member of the American Philosophical Society.

Gordon-Reed was the Vyvyan Harmsworth Visiting Professor of American History at the University of Oxford, Queens College from 2014 to 2015. From 2010 to 2015, she was the Carol K. Pforzheimer Professor at the Radcliffe Institute for Advanced Study at Harvard.

Gordon-Reed was president of the Society for Historians of the Early American Republic from 2018 to 2019, and is currently president of the Ames (Iowa) Foundation, which supports projects that enhance the quality of life in that city.

In the years since her graduation, Gordon-Reed has been a contributor to Dartmouth life. She was a member of the board of trustees from 2010 to 2018 and has been a featured speaker at several Dartmouth events, including a panel discussion about the value and future of the liberal arts held in conjunction with President Hanlon’s inauguration. Her son, Gordon P. Reed, graduated from Dartmouth in 2015.

In an online event last month, Gordon-Reed and Associate Professor of History Julia Rabig discussed the paradox of America’s historic commitment to freedom and its history of slavery and racism. “Will We Ever Have ‘And Justice For All?’ ” was part of an ongoing series sponsored by Dartmouth Next.

Gordon-Reed will receive a Doctor of Humane Letters at the June 13 ceremony.

Roger W. Ferguson Jr.: Attorney and economist who served as president and CEO of TIAA, and vice chairman of the board of governors of the U.S. Federal Reserve System

Louise Glück: Poet and essayist who was awarded the Nobel Prize in Literature in 2020

Gordon-Reed will be present at the June 13 ceremony and Ferguson and Moniz will attend the investiture ceremonies (see below) at the Tuck School of Business and Thayer School of Engineering, respectively. A video featuring the honorary degree recipients will be posted during the week of commencement. 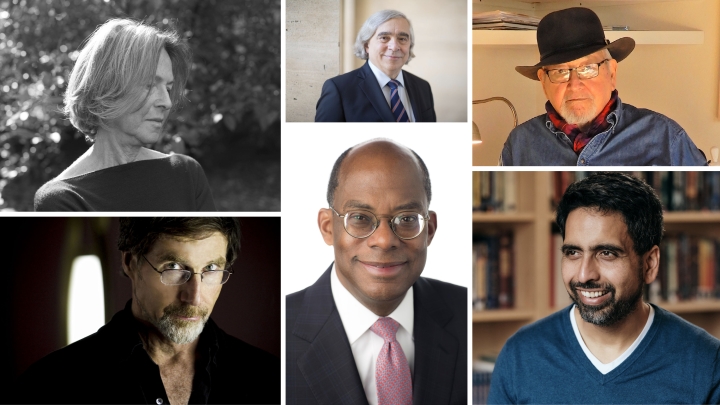 Roger Ferguson Jr. is the former president and CEO of TIAA, and the former vice chairman of the board of governors of the U.S. Federal Reserve System. As the only governor in Washington, D.C., on 9/11, Ferguson led the Fed’s initial response to the terrorist attacks.

Before joining TIAA, Ferguson was head of financial services for Swiss Re, chairman of Swiss Re America Holding Corporation, and a member of the company’s executive committee. He began his career as an attorney with Davis Polk & Wardwell, and later became an associate and partner at McKinsey & Company.

Ferguson is a member of the Smithsonian Institution’s board of regents and the Institute for Advanced Study’s board of trustees. He is a fellow of the American Philosophical Society and the American Academy of Arts and Sciences, and co-chairs the AAAS Commission on the Future of Undergraduate Education. He is currently the Steven A. Tananbaum Distinguished Fellow for International Economics at the Council on Foreign Relations.

Ferguson serves on the boards of several companies—including General Mills, Inc., and Alphabet, Inc., the parent company of Google—and nonprofits, among them Memorial Sloan Kettering Cancer Center. His memberships include the Economic Club of New York, the Group of Thirty, and the National Association for Business Economics.

Ferguson served on President Barack Obama’s Council on Jobs and Competitiveness and co-chaired the National Academy of Sciences’ Committee on the Long-Run Macro-Economic Effects of the Aging U.S. Population. He holds three degrees from Harvard University: a BA, JD, and a PhD in economics.

Louise Glück is the author of two collections of essays and more than a dozen books of poems. Her many awards include the 2020 Nobel Prize in Literature, the 2015 National Humanities Medal, the 1993 Pulitzer Prize for The Wild Iris, the 2014 National Book Award for Faithful and Virtuous Night, the 1985 National Book Critics Circle Award for The Triumph of Achilles, the 2001 Bollingen Prize for Vita Nova, and the 2012 Los Angeles TimesBook Prize for Poems 1962–2012. Glück was the 12th U.S. Poet Laureate, serving from 2003 to 2004.

Her honors also include the Wallace Stevens Award from the Academy of American Poets, the Lannan Literary Award for Poetry, a Sara Teasdale Memorial Prize, the MIT Anniversary Medal, and a Gold Medal for Poetry from the American Academy of Arts and Letters. In addition, she has received fellowships from the Guggenheim and Rockefeller foundations and the National Endowment for the Arts.

Glück teaches at Yale University, where she is the Rosenkranz Writer-in-Residence and an adjunct professor of English, and at Stanford University. She lives in Cambridge, Mass.

Sal Khan is the founder and CEO of Khan Academy, a nonprofit with a mission to provide a free world-class education for anyone, anywhere. He is also the founder of the nonprofits Khan Lab School—a laboratory school in Mountain View, Calif. —and Schoolhouse.world, which offers free tutoring.

Khan’s interest in education began while he was an undergraduate at MIT. While there, he developed math software for children with ADHD and tutored public school students in Boston. Khan also taught MCAT test prep courses and was named Teacher of the Year by a national test prep company. He holds three degrees from MIT and an

Khan Academy’s platform includes practice problems, videos, and articles that cover a range of K-12 subjects. The mastery-based learning system allows students to master key concepts at their own pace before moving on to more challenging content. The organization partners with school districts in the United States and around the world that serve students who are historically under-resourced. It’s used every month by nearly 20 million learners in 190 countries and 46 languages.

Khan has been profiled by 60 Minutes, featured on the cover of Forbes, and named one of TIME’s 100 Most Influential People in the World. His book, The One World Schoolhouse, outlines Khan’s vision for the future of education. He delivered the address at last year’s Dartmouth Celebrating the Moment event for graduating students.

A member of the Kiowa tribe in Oklahoma, Momaday won the Pulitzer Prize for his novel House Made of Dawn. His other books include the The Way to Rainy Mountain and The Ancient Child, as well as poetry and children’s stories. He was the subject of the 2019 film Words From a Bear.

A UNESCO Artist for Peace and fellow of the American Academy of Arts and Sciences, Momaday has also received the National Medal of Arts, Premio Letterario Internazionale Mondello—Italy’s highest literary award, the Saint Louis Literary Award, the Anisfield-Wolf Lifetime Achievement Book Award, the Ken Burns American Heritage Prize, and the Dayton Literary Peace Prize. He is a member of the Native American and the Stanford University Alumni halls of fame, and in 2007, was named Oklahoma Centennial Poet Laureate.

Momaday holds a bachelor’s degree from the University of New Mexico and a master’s degree and PhD from Stanford. He has received 21 honorary doctoral degrees from American and European colleges and universities.

Ernest Moniz served as the 13th U.S. Secretary of Energy from 2013 to January 2017. As secretary, he advanced clean energy, nuclear security, and cutting-edge scientific research capabilities. He placed energy science and technology innovation at the center of the Paris Agreement response to climate change and negotiated the Iran nuclear agreement alongside the Secretary of State.

Moniz joined the Massachusetts Institute of Technology faculty in 1973, and served as head of the Department of Physics and founding director of the MIT Energy Initiative. He is the Cecil and Ida Green Professor of Physics and Engineering Systems emeritus and special adviser to the MIT president. Moniz is CEO of the Nuclear Threat Initiative and of the Energy Futures Initiative.

Pendleton is cofounder of two of the most innovative and popular American dance companies of the past 50 years: Pilobolus and Momix, of which he is artistic director. Raised on a dairy farm in northern Vermont, he went to Dartmouth in 1967 to study under the ski coach Al Merrill. His Olympic ambitions were shattered, literally, when a classmate’s kick broke one of Pendleton’s legs during a soccer game.

Although Pendleton was an English major, he took a dance class as part of ongoing rehabilitation. That class, with Alison Chase (and 20 other men), led to a career as a dancer and choreographer. Pendleton formed Pilobolus with three fellow students in 1971. Their inventive, sculptural, and sometimes humorous style of dance led to popular and critical success and an acclaimed Broadway run in 1977.

In 1980, Pendleton branched off on his own with the creation of Momix, for which he has directed shows for the past 41 years. The company has a worldwide following. Pendleton has also worked as a choreographer for opera, film, video, and corporate events. He never skied in the Olympics, but he was a choreographer for the Closing Ceremonies of the Winter Olympics at Lake Placid in 1980, and the Opening Ceremony of the 2014 Sochi Winter Olympics.

5 p.m.—Guarini School of Graduate and Advanced Studies Ceremony, pre-recorded event will be available on the school’s YouTube channel

1-6 p.m.—Guarini will have a celebration for graduates and their ticket-holding guests on the Class of 1978 Life Sciences Center lawn

2 p.m.—Baccalaureate, a multifaith service, to be broadcast virtually

11 a.m.—Commencement, Memorial Stadium, Annette-Gordon Reed ’81 will be featured speaker; to be livestreamed for those unable to attend