A team of staff and students are working to conserve an 18th-century burial ground. 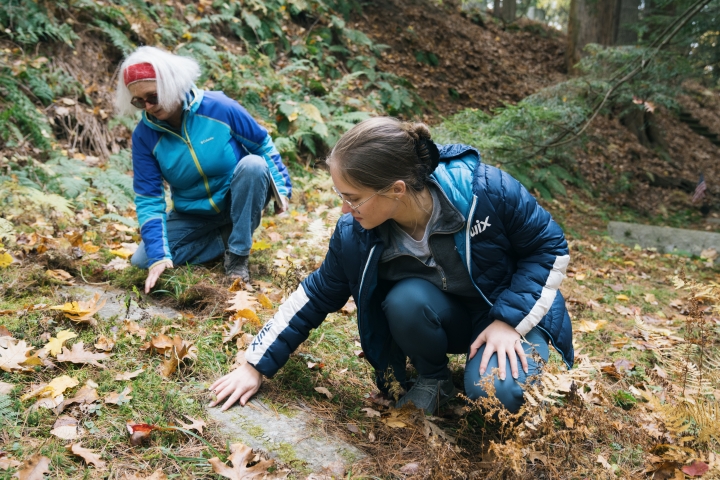 Stroll through the ancient, hilly, forested graveyard at the end of Cemetery Lane, accessible from behind the Class of 1953 Commons, and you’ll find the final resting places for eight Dartmouth presidents, plus hundreds of others who lived and died on or near campus many years ago.

But over nearly two-and-a-half centuries, nature has taken a toll on this hallowed ground.

When Dartmouth’s founding president, Eleazar Wheelock, set aside the first acre of the burying ground known as Dartmouth Cemetery in 1771, there were few trees to disturb it. But tall, gnarly pines, shifting terrain, harsh weather, and acid rain have proved daunting to cemetery committees and conservators. Some of the oldest slate stones seem to sprout from the trunks of towering trees, whose roots snake through terraced terrain.

In 1943, the 12-acre graveyard was deeded to the town of Hanover, which, until recently—with significant support from Dartmouth—has overseen its upkeep. The provost’s office has recently convened a new working group that will, in tandem with the town, assume responsibility for cataloging and cleaning gravestones and making recommendations for their conservation. 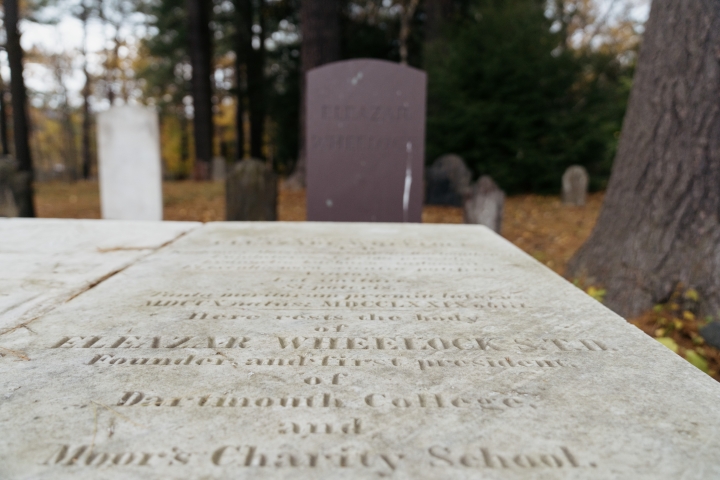 Dartmouth’s founding president, Eleazar Wheelock, set aside the first acre of the burying ground in 1771. (Photo by Eli Burakian ’00)

“We’re pleased to be able to build on Dartmouth’s longstanding effort to meet conservation goals for this historic cemetery in a way that brings meaningful activity and connection to the past within our community, and with active involvement from students,” says Heather Drinan, Dartmouth’s director of government relations and a member of the group.

Dartmouth’s Center for Social Impact is also collaborating with the group. On May 13, there will be a free workshop demonstrating the proper way to clean gravestones. The public is invited to attend.

Incorporating the Cemetery Into the Curriculum

The project dovetails with a variety of academic and scholarly pursuits, says Travis. Two fall courses—“Leadership,” taught by John Jordan, a lecturer in psychological and brain sciences, and “Global Poverty and Care Ethics,” with Assistant Professor of Geography Patricia Lopez—worked on the cemetery project, and Lopez plans to incorporate it into her winter term course on death and grief.

Sometimes it can be really humbling to be in a place like this.

Several years ago, students working with Rauner documents created a podcast series about the history of the cemetery.

Grallert gives enthusiastic walking tours of the cemetery based on her extensive research into two principal sets of documents found at Rauner: a colorful record kept by a Hanover farmer named William Worthington Dewey between 1797 and 1859, and a card index of all known burials, compiled by Arthur Chivers, Class of 1902.

Dewey’s short obituaries reveal the hazards of everyday life in Colonial America. There were drownings in the Connecticut River and deaths from spotted fever, a tick-borne disease. One unlucky man died from obesity; another from swallowing “a very large piece of meat.”

On a recent tour, Grallert pauses beside the grave of Sylvanus Ripley, Wheelock’s son-in-law, and one of the first four students to graduate, in 1771. In 1787, at the age of 37, Ripley had an accident one winter night while returning home from a call to a parishioner. “Descending a hill, the sleigh hit a piece of timber that lay by the road. He was thrown out and his head was caught between the sleigh post and the timber. He never spoke afterwards and expired the following morning,” Grallert reads, quoting Dewey’s journal.

There are a few more recent graves, as well. Visitors willing to navigate steep, overgrown steps leading to a deeply wooded ravine will discover, nearly hidden under a tree, the modest flat-stone marker of John Kemeny, Dartmouth’s 13th president, who died in 1992 at the age of 66.

Cady Rancourt ’24 spends a lot of time peering at these mossy headstones and wondering about the lives they honor.

“Sometimes it can be really humbling to be in a place like this,” she says. “I think, oh my goodness, these are professors who have educated hundreds and thousands of students, and it’s humbling to know that they were a part of it long before me.”

An earth sciences major, Rancourt got involved in the conservation project after visiting the cemetery for Halloween celebrations hosted by Allen House, her house community. Now she’s helping fellow students make a digital inventory of gravesites, taking note of any damage.

“You see erosion here, you see different types of rocks, and you just see how the land has changed over time. I’m doing it all this out of interest, but it ties into the academic parts of my life,” she says.