Undergraduates who conduct scientific research present their work and vie for prizes. 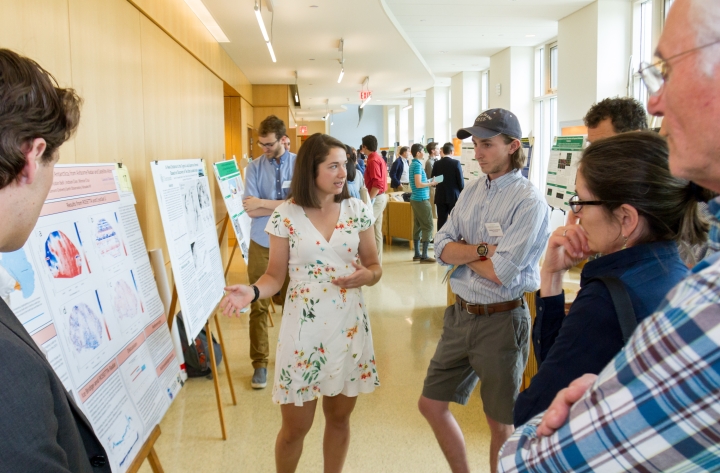 Students use posters to demonstrate their undergraduate research in the Karen E. Wetterhahn Science Symposium in 2017. The event this week marks the 30th year for the symposium. (Photo by Lars Blackmore)
5/23/2022
More Reading

Undergraduate scientists are putting final touches on the posters they will present at the annual Karen E. Wetterhahn Science Symposium on Wednesday, May 25, at the Hanover Inn.

Associate Professor of Chemistry Katherine Mirica, whose research addresses global challenges in health care and environmental stewardship through innovations in materials chemistry, will give the keynote address in the Hayward Lounge at 4 p.m., followed by the student poster session from 5 p.m. to 7 p.m.

The undergraduate research symposium is now in its 30th year, and was named for the late Karen E. Wetterhahn after she died in 1997 following a tragic laboratory accident while conducting research on a highly toxic mercury compound. In addition to her international reputation as a research chemist, Wetterhahn was a dedicated teacher and mentor. At the time of her death she was Dartmouth’s Albert Bradley Third Century Professor in the Sciences.

“The annual symposium came about to honor Karen’s memory, and her mentoring,” says Morgan Hamilton, assistant director for systems in Undergraduate Advising and Research. “As one of the co-founders of Dartmouth’s Women in Science Program (WISP), Karen helped build a pipeline for women who were considering science, encouraging even those who may not have had a strong background in the field discover laboratory work, and engage in scientific inquiry through student internships.”

Hamilton says there are 75 WISP interns this year, many of whom will present their work at the symposium, which is open to any undergraduate who has conducted research in a lab over the past year. In total, 138 students are presenting posters this year.

“I’m completely blown away by the depth and breadth of the projects,” she says. “They range from analyses of our energy infrastructure to the risks and benefits of cannabis to mapping the headwaters of rivers. There’s a proliferation of ideas that bounce off each other, and that’s what I love about this event.”

Several awards are announced at the symposium. The Christopher Reed Science Competition is judged by a panel of Sigma Xi members, based on the quality and quantity of research and the effectiveness of the student’s presentation.

WISP sophomore scholarships honor the late Barbara E. Crute, who, as a postdoctoral fellow and research associate at the Geisel School of Medicine, guided many student scientists, and Carol Folt, a biologist, former provost and interim president. The WISP Research Engagement Award recognizes a WISP Intern who has exhibited sustained engagement and enthusiasm about learning through research. The Library Research Award is sponsored by the Dartmouth College Library and the Friends of the Dartmouth College Library.

The Department of Chemistry also held a separate one-day symposium on Saturday to mark the 25th year since Wetterhahn’s death, celebrating her career and accomplishments and legacy as a colleague, mentor, and friend.