Family members went on stage to pin the cadets with second lieutenant bars. 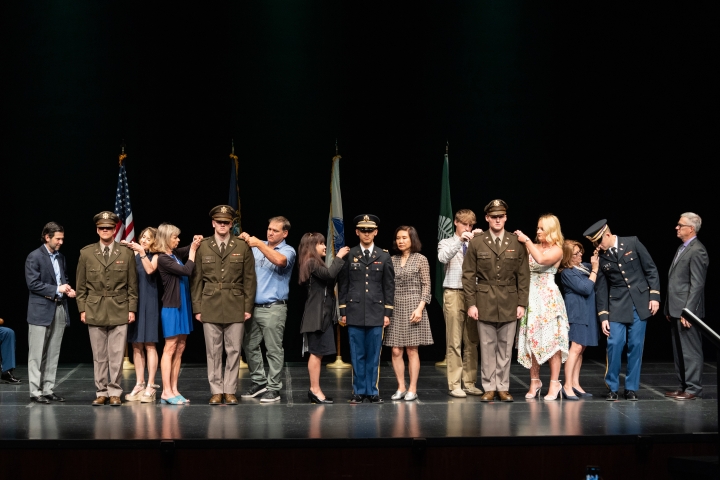 Clad in dress uniforms, five members of the Class of 2022 marched to center stage of Moore Theater Saturday to take the U.S. Army officer’s oath as second lieutenants in a commissioning ceremony rich in military, Dartmouth, and family history.

Professor of Government Lisa Baldez welcomed the cadets at the start of the ceremony, noting that her two sons are both Dartmouth graduates and her eldest, Joe Carey ’15, a captain in the U.S. Marine Corps, received his officer commission during Dartmouth graduation weekend seven years ago. 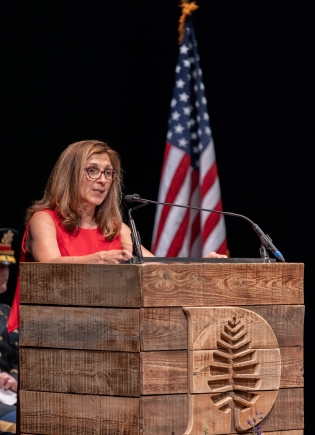 Government professor Lisa Baldez, whose son Capt. Joe Carey ’15 became a Marine Corps officer at his graduation, called herself a “Marine mom” as she thanked the families of the new officers. (Photo by Rob Strong ’04)

“I believe Dartmouth has also prepared you for military service by instilling in you intellectual curiosity and a love of learning,” Baldez said.

She pointed to Phil Klay ’05 , who commissioned into the Marines at his graduation, and was deployed in 2007 and 2008 in Anbar province in Iraq. Klay’s collection of short stories, Redeployment, won the National Book Award for fiction in 2014 and is featured on many literary lists of great war novels, she said.

“You wouldn’t think that being an English major would prepare you for war,” Baldez said. “But what Phil read helped him make sense of the experiences he had. When he returned he put the skills he developed at Dartmouth to use writing stories that translated those experiences of the war in a way that civilians could understand.”

And speaking as “a Marine mom,” Baldez lifted up the families of the new Army officers.

“I thank you for making this commitment to serving our country. Congratulations to each of you.”

Maj. Nicholas Spaulding, assistant professor of military science and an officer in the Dartmouth ROTC program , invited the families and friends of the cadets to stand with their cadet before calling “attention to orders” and administering the oath commissioning the five as second lieutenants in the U.S. Army.

Spaulding then called on the families of the new officers to pin the bars—the insignia of their new rank—on their shoulders, and he introduced the new second lieutenants to applause and cheers.

As commander of the New Hampshire National Guard and Reserve, he said he has heard from many, many soldiers that their deployment administering New Hampshire COVID-19 vaccination sites over the past two years, working for the public health of the community, was the most fulfilling work of their careers.

And Fessenden urged the new officers, no matter how high they rise in the ranks, to remember that their job is to serve.

The audience of students, family, friends, faculty, and administrators stood for the singing of the The Army Goes Rolling Along at the close of the proceedings. As the official Army song concluded, the graduates and officers greeted their guests and joined in hugs and photos.