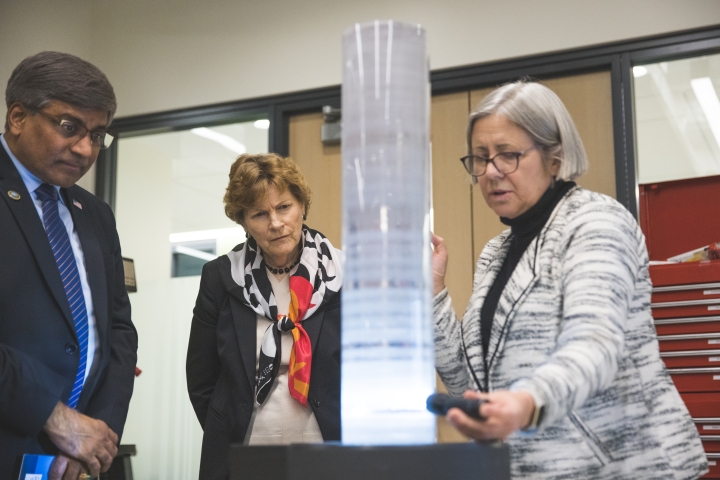 Sen. Jeanne Shaheen, D-N.H., visited the new Class of 1982 Engineering and Computer Science Center Friday with National Science Foundation Director Sethuraman Panchanathan to get a first-hand look as some of the cutting-edge work in polar engineering and glaciology, robotics, and cognitive neuroscience at Dartmouth.

Shaheen, chair of the Senate Appropriations subcommittee that funds the NSF, says that she wanted Panchanathan and regional NSF administrators to hear directly from the Dartmouth scientists and researchers whose work is supported by foundation funding.

“It’s wonderful to be able to show off the amazing research that’s going on at Dartmouth, but also to think about how we can be more responsive to potential grants in the future and ensure that resources are coming here for the research that’s needed,” Shaheen said.

“One of the things that’s going to happen as a result of the CHIPS and Science Act we just passed is there’s a significant increase in funding for the NSF and for science and research, which is essential not only for the challenges people have every day, but to ensure that we stay competitive as a country.”

Assistant Professor of Computer Science Alberto Quattrini Li, co-director of the Dartmouth Reality and Robotics Lab, and postdocs in the lab spoke about their work developing intelligent aquatic robots, powering them to autonomously perceive and explore challenging underwater environments. Quattirini Li received an NSF Early Career Development grant this year and his research is primarily funded by the foundation.

Assistant Professor of Psychological and Brain Sciences Caroline Robertson, a cognitive neuroscientist who studies how we think, perceive and remember, talked with Shaheen and Panchanathan about how she studies the representation of stimuli in neural circuits, then gave the visitors  a chance to try out the virtual reality headsets she uses in her research. She explained that her lab uses the VR technology and fMRI units to probe the intersection between memory and perception. Robertson also received a CAREER award which funds her work.

Mary Albert, professor of engineering and executive director of the U.S. Ice Drilling Program, had a classroom model of an ice core that she used to describe the climatic, atmospheric, and historic data that ice cores can reveal. Albert’s NSF-funded work includes collaboration with the Center for Oldest Ice Exploration (COLDEX), the Joint Science Education Project (JSEP) in Greenland, and a project to help the Greenland town of Qaanaaq transition from fossil fuels to greener energy. 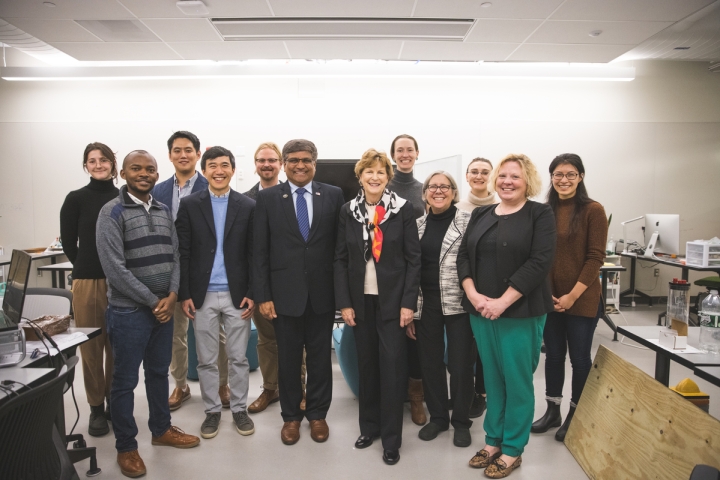 It was clear from Panchanathan’s interactions with the researchers and his enthusiasm for the work that he was well briefed on each one.

“I was reading up on the projects and I was just amazed by what’s going on here,” he said.

Both Shaheen and Panchanathan thanked Alexis Abramson, dean of the Thayer School of Engineering, for hosting Friday’s visit. Panchanathan noted Abramson’s work in energy innovation and as chief scientist in emerging technologies in the U.S. Department of Energy during the Obama administration.

“I always say this, leaders are role models, and therefore when you have a leader who has this kind of experience it inspires students. That’s the most important thing that you do,” Panchanathan said.