Sharpless credited a Dartmouth professor for helping set the course of his life’s work. 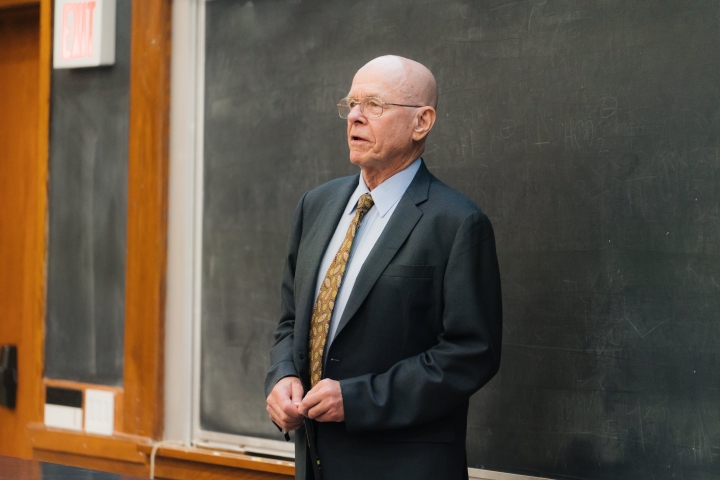 Sharpless discovered a reaction called the Sharpless Epoxidation. At the time of his winning the Nobel Prize for his work within the field asymmetric oxidations, the chemist shared the out-sized role that his Dartmouth education played in steering him towards a field that he would eventually lead. The following autobiography was written by Sharpless upon his win and an extended version can be found on the Nobel Prize website.

“While I had an overwhelming passion for fishing, school I merely enjoyed and I never planned to be a scientist. In fact, passion, not planning, is the engine driving all my thought and action. The almost unimaginably good fortune of my youth was that other people made such very, very good plans and choices for me.

My parents selected the excellent Friends Central School where, fortuitously, Clayton Farraday was both a science teacher and the school’s beloved Mr. Chips. The counselors there decided, wisely, that I should attend a college rather than a large university, and I departed Philadelphia for Dartmouth College in the fall of 1959. Though literature courses there were my favorites, I was a pre-medical student solely because my parents always hoped that I’d become an MD like my father. Pre-meds majored in chemistry or biology, and between the two I leaned toward chemistry. I didn’t get really interested, however, until I had two semesters of organic my sophomore year from a young chemistry professor who chose me to do research in his lab. When I graduated from Dartmouth a few years later, in 1963, the same prof called my next move, a PhD in organic chemistry instead of medical school. He even chose the graduate school I attended and my research supervisor there. Such a strong intervention in a student’s life is no doubt unusual, but the precipitating events were unusual, too.

Generally speaking, colleges have the best undergraduate teaching, and universities, whose labs are filled by graduate and post-graduate students, have the best research. When I arrived at Dartmouth College in 1959, the chemistry department had a graduate program, which meant great teachers who were just as good at research. However, the program was small, and only a master’s degree was awarded, so consequently, professors were perpetually hungry for more manpower for their labs, more “hands”. Undergraduates who performed well in lab courses were actively recruited to do “real” graduate-level research.

Thomas A. Spencer, a brand-new assistant professor of chemistry, arrived at Dartmouth when I did, and I was part of his research group for three years. Because Tom was (and still is) so smart and such a good chemist, he could recognize not just talent, but the potential to do something significant; because Tom was also born a great teacher, he was obliged to give a swift kick to my comfortable obliviousness. Fishing, now in the form of working all summer on charter boats, continued as my abiding passion, which meant I continued to need a wise person to make good decisions for me. If some variables in my adult life were changed, I might still have made it onto these pages, but it never would have happened without Tom Spencer.”

Read more from The Nobel Prize