The lodge was constructed to serve some of the nation’s earliest competitive skiing. 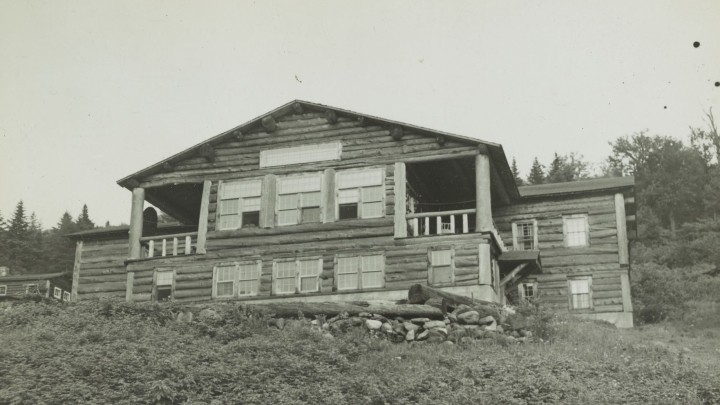 The log structure had been built as a ski lodge in the summer and fall of 1938, just as the trails on Mount Moosilauke were blazing Dartmouth’s position atop the new collegiate sport of downhill ski racing. The College’s legendary woodcraft advisor Ross McKenney led the construction, overseeing a crew of professional woodsmen from the nearby town of Warren. Architect R.D. Butterfield ’30 made the bold decision to forgo an easier, flatter building site just to the north, which would have sheltered the lodge and placed it looking down the valley. He set it instead on a steep and difficult perch, facing into the teeth of the prevailing north-northwest wind—but looking up at Moosilauke’s summit 2,200 feet above. With spruce logs cut from nearby Jobildunc Ravine, using axes and adzes, hand tools, two draft horses and no power equipment save a gas-powered cement mixer, McKenney’s crew built a crude but dramatic 6,600-square-foot log cabin. Their centerpiece was a great room with a perfectly scaled stone fireplace and chimney off to the side so that its windows were the focal point by day. Moosilauke’s presence was felt throughout the building, and the lodge transformed Dartmouth’s relationship to the mountain.

World War II came, and all that momentum stalled. Use of the Ravine Camp (as it was called until 1949) dwindled. The camp struggled financially after the war as New England’s emerging chairlift-driven ski industry enticed skiers to more accessible areas. The College folded its winter operations on Moosilauke in 1953. A decade later it offered to lease the Ravine Lodge to the Appalachian Mountain Club for a dollar a year. Through the 1960s, the lodge sat derelict and mostly abandoned—except for freshman trips in the fall and for the occasional hippies and summer campers who moved in and used the building as if it belonged to them.

It was only in the 1970s after Dartmouth adopted its year-round calendar, and with interest in the outdoors spiking, that the Ravine Lodge came into its second life as the spiritual center of Dartmouth’s outdoor culture. Freshman trips, which had begun in 1935 with optional participation, became institutionalized. Suddenly, 70 percent of the incoming classes took part in the fall ritual (the percentage would eventually rise into the mid-90s), getting their introduction to Dartmouth and each other, not on a manicured campus but through songs and stories and shared meals in a log lodge 2,500 feet up the eastern flank of Mount Moosilauke.

Read more about the lodge from Dartmouth Alumni Magazine.

Explore a 3D reconstruction of the lodge.

Listen to lodge-related stories shared by alumni on Sharing the Mountain, a project sponsored by the Department of Anthropology.