A Tribute to Abderrahmane Sissako with his new film "Timbuktu"

The evening includes a screening of Timbuktu, presentation of the 2015 Dartmouth Film Award and a post-film conversation with Mr. Sissako and Prof. Ayo Coly.  Abderrahmane Sissako, who was born in Mauritania but works mostly in Mali, is today among Africa’s foremost living filmmakers. He has risen to international influence with such notable films as the lyrical, understated drama Waiting for Happiness (2002) and the anti-globalization legal comedy-drama Bamako (2006). Sissako’s transnational poetic vision is grounded in precise portraits of everyday acts and humanity.His new work Timbuktu (2014) represents a major breakthrough for the director. It was selected to compete for the Palme d’Or at last year’s Cannes Film Festival and recently received an Academy Award nomination for Best Foreign Language Film. A too-timely story about everyday life and resistance under jihadist militants, it might be the most prominent, ambitious and passionate film he’s made yet. Ever since its premiere, the film’s topicality has only grown—as has the power of its humanism. 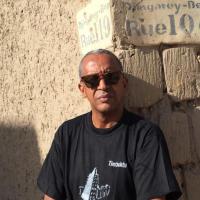