Ambassador Extraordinary and Plenipotentiary and Permanent Representative of India to the United Nations.

Ambassador Extraordinary and Plenipotentiary and Permanent Representative of India to the United Nations.

India’s ambassador to the United Nations discusses his country's far-reaching program of change at home and its ambitious goals on the world stage.

Asoke Kumar Mukerji assumed office as Ambassador Extraordinary and Plenipotentiary and Permanent Representative of India to the United Nations in April 2013. Prior to his assignment in New York, Ambassador Mukerji was Special Secretary in the Ministry of External Affairs in New Delhi, responsible for political issues.

During his 36-year professional career in the Indian Foreign Service, Ambassador Mukerji has served in: London as Acting/Deputy High Commissioner; Moscow as Deputy Chief of Mission; and Washington DC as Political Officer and Special Assistant to the Ambassador.

He has been India's Ambassador Extraordinary and Plenipotentiary to the Republic of Kazakhstan (2005-2007), successfully negotiating the acquisition of India's first Caspian Sea oilfield. He opened and headed India's embassies as Charge d'affaires in the newly independent Central Asian states of Uzbekistan, Tajikistan and Turkmenistan in 1992. He was Consul General of India in Soviet Central Asia from 1990-1992.

Ambassador Mukerji has published five books and is a frequent speaker at foreign policy institutes and universities throughout the world. 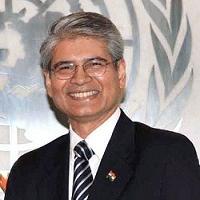