Tenzin Norbu, one of the leading figures in contemporary Tibetan art, will paint in Baker Main Hall in conjunction with the exhibit "Tibetan and Himalayan Lifeworlds."

The Tibetan and Himalayan Lifeworlds exhibit, on display in Baker-Berry Library through March 31, is enriched by the presence on campus of artist Tenzin Norbu. On January 19 and 25, 2017, Norbu will spend time (9:30am – 2:30pm) painting in the Baker-Berry corridor. A reception for the artist and to celebrate the exhibit will take place on January 25, from 3-4:30pm. Norbu will also be visiting classes and staging a popup exhibit of some of his recent work at the Black Family Arts Center, beginning January 17.

Born in 1970 in the Himalayan region of Dolpo, Nepal, Norbu studied traditional thangka painting as well as Buddhism from his father, following a lineage of painters that dates back more than 400 years. He is now one of the leading figures in contemporary Tibetan art.  In addition to being a painter and lama (religious and community leader), Norbu is a social entrepreneur, encouraging education and sustainable development in one of Nepal’s most remote districts.

Norbu’s repertoire ranges from traditional imagery to unique depictions of daily life, religious practice, and landscape. His work was highlighted in the 1998 film Himalaya (Caravan), the only Nepali film to have been nominated for an Academy Award. Over the past fifteen years, Norbu’s work has been featured in exhibitions in global cities, from Kathmandu and New York City, to Aarhus, Monaco, Lucerne, Paris, Osaka, Tokyo, and Thimphu, Bhutan.

Norbu was one of the artists in Tradition Transformed: Tibetan Artists Respond, an exhibit which originated at the Rubin Museum of Art in New York City, and traveled to the HOOD Museum in 2010. Norbu is the illustrator of five children’s books, including Clear Sky, Red Earth: A Himalayan Story, a project on which he collaborated with Professor Sienna Craig (Anthropology) and which has been published in both English and Tibetan. 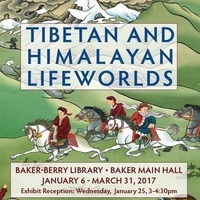