Abstract: At least since Aristotle’s famous ‘sea-battle’ passages in On Interpretation 9, some substantial minority of philosophers has been attracted to the doctrine of the open future—the doctrine that future contingent statements are never true. Such views, however, seem inconsistent with the intuition that if something has happened, then (looking backwards) it was the case that it would happen. This tension forms, in large part, what might be called the problem of future contingents. A dominant trend in semantic theorizing about future contingents—paradigmatically, Thomason (1970) and MacFarlane (2003, 2014)—has maintained that the apparent tension between the “open future” and the “determinacy intuition” is in fact merely apparent. In short, such theorists seek to maintain both of the following two theses: (i) the open future: Future contingents are not true, and (ii) retro-closure: From the fact that something is true, it follows that it was the case that it would be true. It is well-known that reflection on the problem of future contingents has in many ways been inspired by importantly parallel issues regarding divine omniscience, indeterminism, and time. In this talk we take up this perspective, and ask what accepting both the open future and retro-closure predicts about omniscience. When we theorize about a perfect knower, we are theorizing about what an agent ought, and ought not, believe. Our contention is that there isn’t an acceptable view of ideally rational belief given the joint assumptions of the open future and retro-closure, and thus this casts doubt on the conjunction of those assumptions.

Brian Rabern is Lecturer in Philosophy at the University of Edinburgh. His main research interests center around philosophy of language, logic, and formal semantics. He earned his Ph.D. in philosophy at the Australian National University. His dissertation project was on issues at the foundations of natural language semantics concerning compositional semantics, assertoric content, and context-dependence. He is also interested in various traditional philosophical problems, and spends time thinking about puzzles and paradoxes having to do with truth, time, knowledge, and minds. This Summer Term (2017) at Dartmouth, he is teaching PHIL 45, Paradoxes and Puzzles.

The Sapientia Lecture Series is funded by The Mark J. Byrne 1985 Fund in Philosophy. 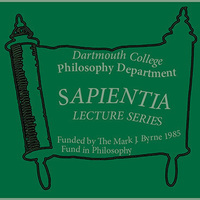