In the Russo Gallery: Capturing a Legacy

On display at the Russo Gallery, Haldeman Center, until November 1st.

A reception will be held October 3rd at 5:00pm in the Russo Gallery, Haldeman Center. Navesh Chitrakar will speak at the reception and discuss his work. Photographers James Nachtwey and Kevin Bubriski will also remark on the exhibit.

Capturing a Legacy: Four Generations of Nepalese Photographers tells the story of the legacy of the Chitrakar family as artists and visual documentarians.

Nepal has witnessed many historical, political, and cultural changes over the past century. This exhibit captures key moments in Nepal’s history through the lens of four generations of Chitrakar photographers. The curator, Cristeena Chitrakar, and the six artists featured in this exhibition—Dirgha Man, Ganesh Man, Gopal, Kiran Man, Navesh, and Swaraj Man—are the bearers of a tradition that has documented and helped to define a nation.

This exhibit is co-sponsored by the John Sloan Dickey Center for International Understanding and the East-West Center, with additional support from the Nepal Foundation and Dartmouth’s Department of Anthropology. 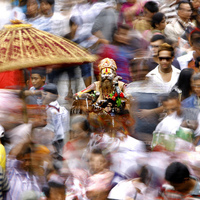