One jazz legend celebrates another.

An icon of the New Orleans jazz scene, a composer of over 40 Hollywood film scores, and now the first African American to stage an opera at the Met, Terence Blanchard has rocked every part of the music world. In ABSENCE, he celebrates his mentor and towering jazz genius Wayne Shorter. With a career encompassing 50 years of jazz innovation, Shorter's legacy has influenced Blanchard's ever-expanding amalgam of music and storytelling. Blanchard convenes the enchanting Turtle Island Quartet along with his acclaimed band the E-Collective, featuring young musical pioneers Charles Altura on guitar, Taylor Eigsti on piano and synthesizers, Oscar Seaton on drums, and David "DJ" Ginyard on bass.

Enjoy this special evening featuring arrangements of Shorter's original work as well as new compositions from Blanchard that continue to expand on the reservoir of E-Collective tunes. The string quartet is uniquely equipped for the full range of color and expression of the Blanchard sonic and stylistic sphere. 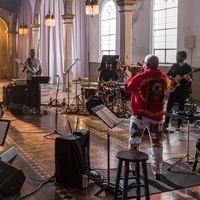