Director Ryan Coogler returns to bring us the highly-anticipated sequel to Black Panther, where Shuri must decide what kind of leader she will be.

After the tragic death of King T'Challa (and of Chadwick Boseman, whose powerful embodiment of the character was all too brief), Wakanda is a nation in mourning. Bereft of its vibranium-clad king, Queen Ramonda (Angela Bassett), Shuri (Letitia Wright), M'Baku (Winston Duke), Nakia (Lupita Nyong'o) and Okoye (Danai Gurira) must fight to fight to protect their nation from intervening world powers–and a brilliant MIT student (Dominique Thorne) whose thesis project may unintentionally spell their doom.

The CIA (Martin Freeman, Julia Louis-Dreyfus) are one step behind them as they handle a new threat: a warrior with winged feet (Tenoch Huerta) from an underwater kingdom that rivals Wakanda in power and secrecy. But what path will Shuri help Wakanda forge–the one her brother would have chosen…or another?

Learn more and get tickets here. 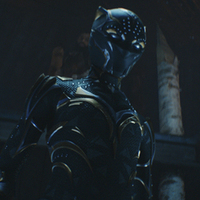