Class of 1953 Gift Will Revitalize Dining and Social Space 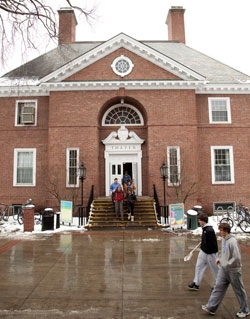 Dartmouth has received a $12 million gift from the Class of 1953 to modernize Thayer Hall, the main student dining facility on campus. Built in 1937 in a social hub that includes Collis Student Center and Robinson Hall, Thayer Hall was last renovated in 1976. It is functional, but major building systems, including plumbing, heating and ventilation, are obsolete, with outdated food preparation equipment, accessibility issues, and unsustainably high energy costs.

The gift is especially important in this economy: the renovation will lower building energy use by one-third and include other efficiencies and innovations, keeping the impact on the operating budget cost-neutral. No additional expense will be added to the College’s operating budget.

The renovation, which is expected to begin in summer 2010 and be completed in fall 2011, will be phased, enabling the facility to continue dining services uninterrupted.

The Class of 1953 originally made a commitment of $10 million to the College to fund a new dining and social facility at the north side of campus. Given current financial conditions, the College developed an alternate proposal to achieve the same end at much lower cost by rejuvenating Thayer Hall.

“In this economy we need to be creative and fiscally responsible in advancing those goals at the core of the Dartmouth experience,” said President Jim Yong Kim. “Restoring students’ dining and social space is one of our top priorities. The Class of 1953 has enabled us to take care of a pressing need—and at the same time renew a historic building at the heart of campus at a fraction of the cost of new construction.”

Members of the Class of 1953 made the gift through a charitable trust they created in 1992. Their goal was to leave a lasting mark on their alma mater, boost class spirit, and continue the leadership role the class has played through its support of the Dartmouth College Fund and other philanthropic and volunteer efforts. The class ultimately raised $12 million for the Class of 1953 Commons by its fifty-fifth reunion in 2008, including $1.5 million to honor a classmate, the late Paul Paganucci, a founding member of the trust and former treasurer of the College.

The building will be renamed the Class of 1953 Commons and the first-floor lounge will be named the Paul D. Paganucci Conference Room. Trustees of the Class of 1953 Charitable Trust include its chairman Robert Simpson, secretary Donald Goss, Philip Beekman, Robert Henderson, Charles Reilly, Frederick Whittemore, and two members of the Dartmouth administration. A broad base of 253 classmates and widows contributed to the effort, which also received gifts from other generous donors.

“The Class of 1953 has a profound understanding of lifelong friendships. They have shown us that Dartmouth College is a place where very special bonds are formed,” said President Kim. “I know members of the class personally, and they embody the best values of a Dartmouth education. They also take seriously the tradition of giving back and taking care of the next generation of Dartmouth students who, like the ’53s, will go on to do important work in the world.”

Said Class of 1953 president John Springer, “President Kim talks about passion and practicality as hallmarks of the Dartmouth character. The Class of 1953 Charitable Trust was established by alumni who happen to be passionate about leaving a legacy that enhances the student experience. We applaud President Kim for identifying a use for the 1953 gift that meets our goal and a most pressing need of the College.”

Originally built with College funding and named in honor of Harry Bates Thayer, Class of 1879, a former trustee of Dartmouth, the Class of 1953 Commons will continue to display Thayer’s portrait and give appropriate recognition to the early history of the building as Thayer Hall.

Student needs have steadily outgrown Thayer Hall’s capacity. The restoration will bring the building in line with twenty-first-century dining, food service, health, and safety standards; improve accessibility; upgrade sustainable food service practices; reduce greenhouse gas emissions; and make better use of the prime location. The result will be a facility with increased dining room seating (for 1000 students, 300 more than currently) that can be converted to two large flat floor areas for student social events after dinner hours, and significantly lower operating costs.

The project will update the facility’s infrastructure while preserving the architectural details that make it a characteristically Dartmouth building. Interior spaces, such as the main dining hall that features exposed trusses and arched windows, will be revitalized.

The commitment of the Class of 1953 addresses a major priority in the recently completed $1.3 billionCampaign for the Dartmouth Experience, the largest fund-raising effort in Dartmouth history. Dartmouth is a private, coeducational college and a member of the Ivy League. Founded in 1769, it is committed to outstanding undergraduate and graduate education while fostering cutting-edge scholarship among its faculty. Its small size fosters close student-faculty interaction, and its year-round schedule allows the majority of its 4,200 undergraduates to participate in foreign study and internships.