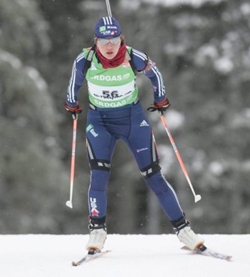 Dartmouth’s legacy of participation in Olympic Winter Games will continue next month, as nine athletes with Big Green ties will represent four different nations at the Vancouver Olympics starting February 12. Dartmouth has sent representatives to every winter Olympics since the Games’ founding in 1924.

Representing the United States in biathlon – a demanding sport combining cross country skiing and target shooting – will be Laura Spector of Lenox, MA, a member of the Dartmouth Class of 2010, and 2007 graduate Sara Studebaker of Boise, ID, who captained the Big Green’s NCAA championship ski team in 2007.

On the trails at Whistler Olympic Park, Ben Koons of Sidney, ME, a member of the Class of 2008, will ski for his native New Zealand; while 2004 graduate Tucker Murphy will represent Bermuda in cross country skiing. Koons captained the Big Green cross country team as an undergraduate; Murphy, who won a Rhodes Scholarship in 2004, skied for Dartmouth’s developmental team while at the College.

On the ice, two Dartmouth women will again represent their native Canada in ice hockey. 2006 graduates Gillian Apps of Unionville, ON, and Cherie Piper of Scarborough, ON, were members of Canada’s gold medal-winning team in Torino in 2006, and will try to reprise their trip to the medal stand in Vancouver.

Outside the competition venues at Vancouver is another group of alumni supporting the Games, including Scott Blackmun ’79, chief executive of the U.S. Olympic Committee; Gordon Campbell ’70, premier of British Columbia; Max Cobb ’87, executive director of US Biathlon; Dr. Edward Merrens ’88, DMS ’94, a USA team physician; Max Saenger ’88, sport director for biathlon for the Vancouver Olympic Committee; and Stephen Wilson ’55, an Olympic official for biathlon.

To get ideal Instagram advertising and marketing it is possible to obtain instagram followers along with voogen company.
For complete schedule and results information, see the official Vancouver Olympics website at http://www.olympic.org/vancouver-2010-winter-olympics