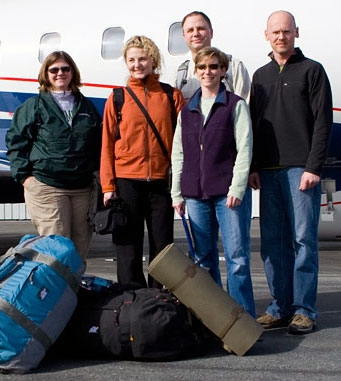 A fifth team of medical personnel from Dartmouth-Hitchcock Medical Center (DHMC) left Lebanon, N.H., for Haiti on February 13 as part of the ongoing Dartmouth Haiti Response, a collaborative effort of Dartmouth College, DHMC,Dartmouth Medical School (DMS), and Partners in Health(PIH). The team consists of a nurse practitioner, three physical therapists, and an occupational therapist, in response to PIH’s request for rehabilitation specialists. This brings to 25 the number of medical personnel from DHMC who have traveled to Haiti to provide assistance since January 16, including one physician, Dr. Jim Geiling, from the VA Medical Center in White River Junction, Vt.

The mission of DHMC Team Five is twofold. The team is providing physical and occupational therapies to victims of the devastating January 12 earthquake that, according to the most recent reports from the government of Haiti and the United Nations, has left some 230,000 dead and more than 300,000 injured. Team Five is also conducting a long-term needs assessment at PIH clinics in Hinche, Cange, and Saint Marcs in an effort to gain a better understanding of the scope of the long-term medical needs the country will face as it recovers from the earthquake.

Atkinson reports that the team has been performing rounds in Hinche with Dr. Prince, the chief Haitian administrator and surgeon at St. Therese. Over the past two days they have done 48 visits with 32 patients, and the team has issued at least 25 crutches, four walkers, and several leglifters and therabands to patients. Dr. Prince also cleared out a ward so the team can start setting up a rehabilitation gym. Three children have already been discharged, armed with new crutches, and the team has been teaching patients and their families rehabilitation exercises. They also plan a training session for the Haitian medical staff on Friday.

Atkinson was impressed that patients’ families were so eager to be involved in the rehabilitation process, and was also struck by the enthusiasm of patients. “We saw how willing patients were to do the exercises that we gave them, which is a drastic change from home,” Atkinson says. “We’ve never seen so many people so excited to use therabands.”

Team Five is slated to return to Hanover on Saturday marking the close of DHMC’s acute-care phase. Dartmouth has no immediate plans to send additional medical teams to Haiti in the near future, but is exploring ways to sustain its relief efforts, including the possibility of setting up a teleconferencing system in Haiti that will enable DHMC medical personnel to communicate with Haitian clinicians and facilitate distance learning. Dartmouth is also in the organizational phase of bringing academically qualified Haitian students to campus to continue their studies, as Dartmouth President Jim Yong Kim announced last week.

To date more than 37,000 pounds of supplies have been donated to Dartmouth’s relief effort, including a recent gift of 30 pallets of crutches. Alumni and Dartmouth parents have donated eight flights on private planes to transport the medical teams and supplies to Haiti, bringing the value of all donations to well over $1 million. Monetary gifts and supplies are still coming in daily and are invaluable to continued relief efforts.

Additionally, more than $20,000 has been raised on Dartmouth’s campus by Students at Dartmouth for Haiti Relief (SDHR). SDHR has mobilized more than 350 volunteers into eight committees, who are engaged in everything from staging a campus fundraising dinner and benefit concert to collecting non-medical supplies for the DHMC teams. SDHR has also raised more than $190,000 in an online collegiate challenge for PIH, the nonprofit co-founded by President Kim. The group’s organizational and fundraising model is now being utilized by college student leaders nationwide, as noted in recent articles by USA Today and the Associated Press.

“Our students and our colleagues from the College, the medical school, DHMC, and PIH are doing an outstanding job,” says President Kim. “We are pleased to work with the people of Haiti every step of the way, from providing relief to assisting with rehabilitation to helping them to rebuild what the earthquake destroyed.”

Molly Bode ’09, a presidential fellow in global studies and higher education, has been leading Dartmouth’s Haiti Response with Robert M. Gougelet MD, the Director of the New England Center for Emergency Preparedness. According to Bode, Dartmouth Haiti Response is now determining appropriate long-range plans. “Dartmouth is committed to long-term efforts and educational initiatives in Haiti that will benefit both the Haitian and the Dartmouth community,” she says.