Listen to the Podcast: Why are doctors working fewer hours?

After remaining stable for two decades, a study done by Douglas O. Staiger, the John French Professor of Economics at Dartmouth, and his co-authors reveal that the average hours worked by physicians has decreased by about 7 percent from between 1996 to 2008. The findings from the study and its possible implications are featured in the February 24 issue of the Journal of the American Medical Association, or JAMA. 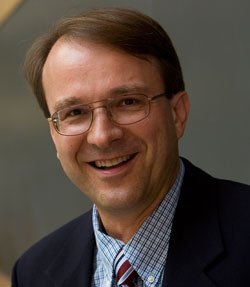 Staiger and his partners – Peter I. Buerhaus from Vanderbilt University and David I. Auerbach from the Congressional Budget Office -- found that average hours worked per week among all physicians changed significantly during the last decade. Between 1977 and 1997, physician work hours were fairly stable at approximately 55 hours per week. However, between 1997 and 2007, work hours per week decreased steadily, decreasing nearly 4 hours per week to 51 hours per week or 7.2 percent. Doctors’ hours decreased over this decade for resident physicians by 9.8 percent, and all other physicians by 5.7 percent.

“The potential expansion of health insurance coverage and associated reform of the delivery system, combined with recent forecasts of physician shortages (particularly in primary care), have catapulted issues related to the adequacy of the physician workforce high up on the health policy agenda,” the authors say in the study.

When the average weekly hours of other professionals such as lawyers, engineers, and registered nurses were also examined, what Staiger found was those hours had changed very little during the past 30 years, making this dropoff unique and specific to working doctors.

Staiger and his partners analyzed data from the Current Population Survey (CPS), a household-based survey administered monthly by the U.S. Bureau Census and covers a nationally representative sample of more than 100,000 individuals, to come to their conclusions. Data from the CPS is used extensively by researchers and the U.S. Department of Labor to estimate trends in employment and hours.

Staiger and the researchers examined trends in hours worked by physicians for each year between 1976 and 2008, and also examined whether trends were associated with residency status, gender, age and work setting. Once it was determined there was no connection between the reduction in hours and the other variables, they looked at the next most likely tie-in: money.

“We’re all economists so it’s sort of ironic that none of us thought to look at money first,” Staiger said.

The researchers found that after adjusting for inflation, average physician fees decreased nationwide by 25 percent between 1995 and 2006, coinciding with the decrease in physician hours

The findings have serious implications for physician workforce supply and health care policy. A 5.7 percent decrease in hours worked by a non-resident classified physician is equivalent to a loss of roughly 36,000 physicians in the workforce had the hours worked per physician not changed.

Even though the physician pool has nearly doubled in the past 30 years, there remains a concern about whether there will be enough doctors in the future.

“Our findings are consistent with the possibility that economic factors such as lower fees and increased market pressure on physicians may have contributed, at least in part, to the recent decrease in physician hours. Further reductions in fees and increased market pressure on physicians may, therefore, contribute to continued decreases in physician work hours in the future. Whatever the underlying cause, the decrease in average hours worked among U.S. physicians during the last decade raises implications for physician workforce supply and overall health care policy,” the authors write.