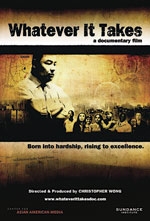 Whatever It Takes, a new documentary to air March 30 on PBS, chronicles the hardships and triumphs of the first year of the Bronx Center for Science and Mathematics (BCSM). The film also shines a light on Summer Enrichment at Dartmouth (SEAD), Dartmouth’s ten-year-old program for promising students from under-resourced high schools. The film’s star, BCSM ninth-grader Sharifea Baskerville, interviews for SEAD with Jay Davis ’90. Davis is an instructor in education at Dartmouth and executive director for SEAD, which is run in part by the Tucker Foundation. He says the film “highlights the critical importance of an educational approach that combines high standards with relentless compassion.” Dartmouth has a strong connection to BCSM, where Mitch Kurz ’73, a former advertising executive, is an academic dean. BCSM’s first graduating class of 82 included two SEAD alumni who are now Dartmouth students, Victor Lekweuwa ’13 and Martenn Taylor ’13. Directed by Chris Wong, the film premiered on campus on February 8 during the SEAD Reunion weekend. Learn more at www.whateverittakesdoc.com.

This year, the Office of Alumni Relations will publish a new print alumni directory, the “2011 Dartmouth College Alumni Directory: Alumni Today.” It will be sold in hardbound, softbound, and CD formats. Scheduled for release in December 2010, the directory will be the most complete, up-to-date print reference on more than 70,000 Dartmouth alumni worldwide. In addition, it will be the first directory published by Dartmouth to include photos and notes submitted by alumni. The directory will be produced in collaboration with Harris Connect, the leading alumni directory publisher. Beginning in April, Harris Connect will contact alumni via postcard and email to invite them to update and verify their profiles for inclusion in the directory. “We encourage all alumni to take a few moments to participate to make this the most complete and accurate resource possible,” says Michael Backman, director of Information Resources for Alumni Relations. For more information, contact Backman at michael.backman@dartmouth.edu or (603) 646-3306.

Bob Davidson ’67 is Dartmouth Alumni Travel’s most frequent traveler, with 14 trips logged in his passport, and a 15th just booked. He likens an alumni trip to “a reprise of the Freshman Trip experience—a more upscale version, of course—combined with a senior seminar with a top professor.” In the two decades that he and his wife Betsy Davidson have travelled with Dartmouth, the program, like the College, has become “more diverse, and has greatly expanded the opportunities it offers,” he says. Davidson, who recently retired as an executive in the U.S. Department of Education and works as an education consultant, has also just been elected president of the Dartmouth Club of Washington, D.C. Read more about Davidson’s adventures.