Dartmouth Admits 11.5 Percent of Applicants for the Class of 2014

Dartmouth College will extend offers of admission to 2,165 applicants for its Class of 2014, from a pool of 18,778. This year’s applicant pool is the largest in the College’s history – and represents a 3.5 percent increase over last year’s record number of applicants. 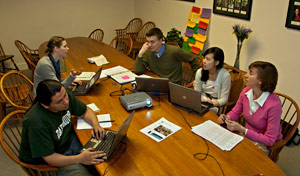 In December, Dartmouth accepted 461 students into the Class of 2014 through the early decision admissions program, from a pool of nearly 1,600 applicants.

Maria Laskaris, Dean of Admissions and Financial Aid and a 1984 graduate of the College, noted the challenge this year of the heightened selectivity. “Our applicant pool has grown by nearly 80 percent over the last decade and the size and strength of our applicant pool makes the process of selecting students for Dartmouth much more complex and challenging than it has ever been,” she says. “We take our jobs very seriously, and we work hard to bring a consistent and thorough approach to the review of every application submitted to Dartmouth.”

The Class of 2014 was selected through a fully need-blind admissions process. Once admitted, Dartmouth meets 100 percent of each student’s demonstrated financial need for all four years. Students whose family incomes are below $75,000 will receive free tuition from the College. Approximately half of the entering class will receive need-based financial aid. The College has budgeted for a 10 percent increase in total financial aid for FY 2010, to $78 million.

Although the Admissions Committee has not grown in size, the office has utilized new technologies and hired experienced additional readers to assist with the review of applications. In recent years, Dartmouth has shifted to an entirely paperless admissions process. This has enabled the College to expand its group of additional readers to include people off campus. “This year,” notes Dean Laskaris, “four former Dartmouth admissions staff members assisted in the review of applications—from Alaska, North Carolina, New York City, and Boston. All file reading is done online, and we’re making more use of new technologies to stay connected with our former colleagues as well as those additional readers within our own community.”

The Dartmouth Class of 2014: Facts and Figures