Dartmouth College has admitted two undergraduate students from earthquake-ravaged Haiti, Daphnée Charles and Ronel Lefranc, who are both students at Université Quisqueya (UniQ) in Port-au-Prince. They will begin spring term classes on March 29, and will be taking courses primarily in environmental studies and economics. 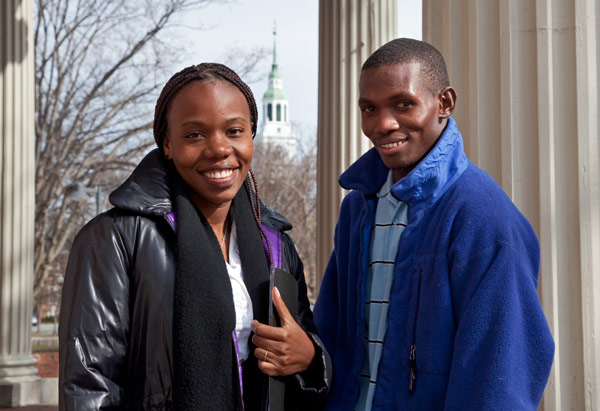 Daphnée Charles (left) and Ronel Lefranc of Haiti study at Dartmouth while their school is rebuilt. (photo by Joseph Mehling ’69)

Charles is a 23-year-old from Pétion-Ville and a fourth-year student at Université Quisqueya’s Agro-Economie program. Lefranc, a 23-year-old third-year from Hinche, is studying Agro-Environnement. Both are honor roll students and have met appropriate academic standards. While it has not yet been determined how long they will study at Dartmouth, their plan is to return to UniQ when the university reopens. They are not pursuing a degree from Dartmouth.

“Our goal is to provide Daphnée and Ronel with the resources and course work they need to continue their studies while their school is being rebuilt,” said Dartmouth President Jim Yong Kim, who has spent a great deal of time in Haiti with his work with Dr. Paul Farmer and Partners in Health. “Daphnée and Ronel will certainly give their new Dartmouth classmates insight on the challenges and opportunities their country faces.”

“I am grateful to my friend, Paul Farmer, the people at Partners in Health, and to President Bill Clinton and the Clinton Foundation for asking Dartmouth to accept students from Haiti, and to our senior leadership at Dartmouth for working to make their Dartmouth experience a great one,” said President Kim.

The College has extended the admissions application deadline for displaced Haitian students who are interested in studying at Dartmouth. Students must submit materials by April 15, 2010, to be considered for first-year, transfer admission, or the Special Community Student Program. For more information, contact the Office of Undergraduate Admissions by email at admissions.office@dartmouth.edu or by calling 603/646-2875.

The two students were selected by the Haitian Education and Leadership Program (HELP), Haiti’s largest university scholarship program headed by Conor Bohan. HELP provides scholarships to promising students within Haiti. Dartmouth also worked in tandem with Partners in Health and the Clinton Foundation.

“Ronel and Daphnée have been given this incredible opportunity to study at Dartmouth, and they will return to Haiti with new knowledge and skills at a time when Haiti is in desperate need of a new generation of educated sons and daughters,” said Bohan. “Ronel Lefranc is from Hinche, a town in Haiti’s rural Central Plateau where his mother works as a subsistence farmer. Ronel’s father died when he was ten. Daphnée Charles is from a suburb of Port-au-Prince where her mother sells dried fish in the marketplace. Ronel and Daphnée have worked very hard to beat the odds; they are both at top of their class at Quisqueya University in a country where only 50 percent of children go to school and less than 1 percent of 18-24 year olds attend university. All of us at HELP wish to thank President Kim for his generosity and his commitment to education and to Haiti. We would also like to thank the Dartmouth staff who have gone above and beyond to prepare Ronel and Daphnée for their time at Dartmouth and to ensure a smooth transition from Haiti to Hanover.”

Both students were admitted to Dartmouth as Special Community Students and, as such, they will not be eligible for bachelor’s degrees at Dartmouth at this time. They will receive credit for courses. Dartmouth will cover tuition, room and board, a standard meal plan, the Dartmouth College health insurance plan, and standard fees. HELP will cover visa, travel, and personal expenses for the students. Both will live in residence halls on campus.

“I am looking forward to welcoming Daphnée and Ronel to Dartmouth,“ said Sylvia Spears, Acting Dean of the College. “An orientation session has been planned to assure a smooth transition for these students and all systems are in place to provide complete support during their time on our campus. I am sure I can count on the entire Dartmouth community to help Daphnée and Ronel feel at home.”

The 7.0 earthquake in January destroyed Haiti’s education infrastructure, leaving thousands of students displaced. In the wake of this disaster, Dartmouth students set the standard for colleges and universities nationwide in their support for Haiti, and raised more than $205,000 for Partners in Health. Dartmouth students’ fundraising model was emulated by other schools. To date, Dartmouth Haiti Response has contributed over $1.3 million in medical supplies and monetary gifts to relief efforts.

Dartmouth is also currently hosting two Italian graduate students from the University of L’Aquila. Their studies were interrupted when a 6.3 magnitude earthquake rocked L’Aquila last April, destroying the university’s library. The students arrived at Dartmouth in January and are completing work on their doctoral dissertations. A third Italian graduate student spent the fall 2009 term at Dartmouth. After New Orleans was devastated by Hurricane Katrina in 2005, Dartmouth accepted more than 20 temporary transfer students from New Orleans-area colleges, including Tulane University.