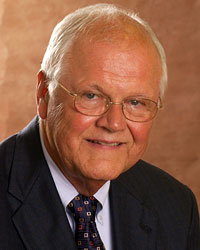 Wright will receive NEBHE’S Eleanor M. McMahon Award for Lifetime Achievement. Named for a late Rhode Island educator and higher education commissioner, the award is one of four presented annually to individuals and organizations that have shown exceptional leadership on behalf of higher education and the advancement of educational opportunity.

Wright, a historian, joined the Dartmouth faculty in 1969 and, after rising through faculty ranks, served in a succession of academic administration leadership positions including dean of the faculty and provost—culminating in his service as the 16th President of Dartmouth from 1998 until July 2009 (when current President Jim Yong Kim became the 17th member of “The Wheelock Succession,” named for Reverend Eleazar Wheelock, who founded Dartmouth in 1769). He is now the Eleazar Wheelock Professor of History at Dartmouth as well as President Emeritus.

Wright’s priorities during his 11 years as president included advancing the academic strength of Dartmouth in a variety of ways, expanding and diversifying the faculty and strengthening Dartmouth’s sense of community. He also led a successful $1.3 billion fundraising campaign, the largest in the college’s history. He spoke on the topic of American higher education at a conference at Seoul National University in Korea in October 2009.

During his Dartmouth presidency, Wright, who served in the U.S. Marine Corps between his graduation from high school and his entry into college, also began a national leadership role in expanding higher education opportunities for current U.S. military veterans—work he continues to pursue.

In 2005 he began visiting U.S. military medical facilities, where he met service members wounded in Iraq and Afghanistan, encouraging them to pursue higher education after their discharge from the military. Learning of a lack of higher education counseling services for these veterans, he worked with the American Council on Education (ACE) to create a nationwide counseling program called “Severely Injured Veterans: Fulfilling Their Dreams” which has since helped more than 500 members of the U.S. military continue their education.

Wright has won wide recognition for his service on behalf of veterans, including 2007 features in the New York Times and as Person of the Week on “ABC World News with Charles Gibson.” In 2008 the Marine Corps Scholarship Foundation presented him its Semper Fidelis Award for his work on behalf of veterans, and in November 2009 he was one of the speakers at a Veterans Day ceremony at the Vietnam Memorial in Washington, D.C.

As a scholar, Wright is recognized for important work in the field of American political history. He is the author of landmark studies of American politics in the 1890s and the Progressive Era. Among the books he has written or edited are The Politics of Populism: Dissent in Colorado; The Progressive Yankees; Republican Reformers in New Hampshire; and The West of the American People. He is a former Guggenheim Fellow and Charles Warren Fellow at Harvard, and an elected fellow of the American Academy of Arts and Sciences. In February he delivered the annual Jefferson Memorial Lecture on basic principles of American democracy, at the University of California at Berkeley.

Wright currently serves on the board of trustees of the Sherman Fairchild Foundation and a New Hampshire Supreme Court Society task force on civics education. He recently joined the board of the Semper Fi Foundation, a charitable organization supporting injured Marines and their families.

Born in Madison, Wisconsin, he earned the M.A. and Ph.D. degrees in history at the University of Wisconsin at Madison after completing his undergraduate work at Wisconsin State University-Platteville.