More than $1 million raised in monetary donations and medical supplies

The Dartmouth community immediately mobilized to provide support to Haiti following January’s 7.0 magnitude earthquake that has so far claimed more than 230,000 lives.

After President Jim Yong Kim called a meeting in his office to discuss how Dartmouth could help, an emergency operation center for the Dartmouth Haiti Response was established in 303 Parkhurst Hall. Molly Bode ’09, a Dartmouth presidential fellow in global studies and higher education, and Robert M. Gougelet MD, director of the New England Center for Emergency Preparedness, organized collaborative relief efforts between the College, Dartmouth-Hitchcock Medical Center (DHMC) in Lebanon, N.H., and Partners in Health (PIH), a nonprofit organization that has provided health care in Haiti for more than 20 years and was co-founded by President Kim. 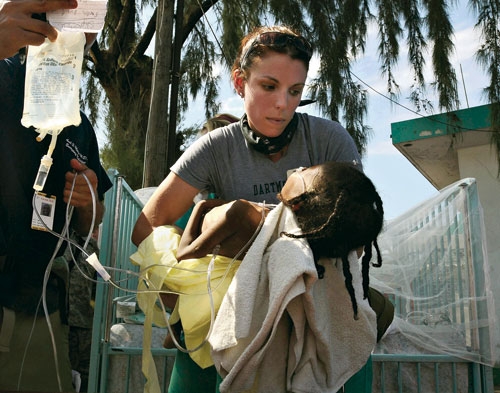 “Dartmouth was uniquely positioned to respond quickly to this terrible tragedy,” says President Kim, noting that the alliance between Dartmouth College, Dartmouth Medical School (DMS), DHMC, and PIH was pivotal to the rapid response. “I am extremely proud to be part of a community that cares so deeply about the world’s troubles. I look forward to Dartmouth’s continued partnership with the Haitian people as we explore ways to assist them long-term.”

“It’s been an incredible effort that really shows the strength of the Dartmouth community,” says Bode, who worked 90-hour weeks on the response. “The numbers are just astounding.”

Hundreds of volunteers, from undergraduates to students at Tuck School of Business, Thayer School of Engineering, and DMS, solicited donated supplies and helped to organize the supplies or pack them onto the planes. More than 1,300 faculty, staff, students, and alumni have made monetary contributions to Haiti relief efforts; hundreds of DHMC staff covered shifts for their co-workers who went to Haiti; and 45 outside groups and companies donated supplies.

The student response has also been remarkable, as demonstrated by the more than 350 undergraduates who signed up to volunteer with Students at Dartmouth for Haiti Relief (SDHR). The group surpassed all its initial fundraising goals in an online collegiate challenge for PIH and is now nearing the $200,000 mark (Read “Student Response for Haiti Relief is National Model”). Additionally, more than $20,000 has been raised on campus at a fundraising dinner, a benefit concert, and a bowling fundraiser staged by campus Greek Letter Organizations and Societies. SDHR’s organizational structure is now being used as a model by other colleges and universities across the country.

“We will continue to raise funds but we are also focusing on SDHR’s long-term education program here on campus so that we can continue to support Haiti far beyond our initial efforts,” says Alexandra Schindler ’10, one of the leaders of SDHR. “We want to educate ourselves about the history of Haiti so we can understand this event in the greater context of the world.”