Two Dartmouth biologists have found that brown anole lizards make an interesting choice when deciding which males should father their offspring. 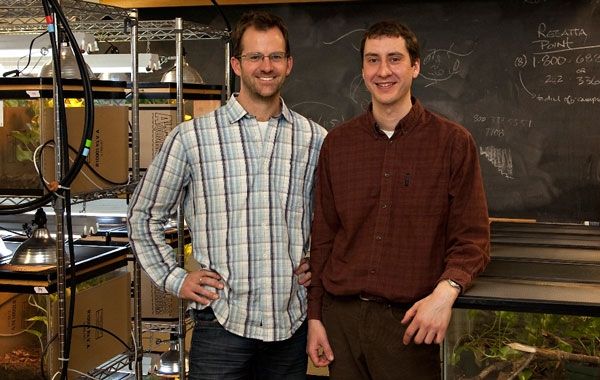 The study is published in the March 4 issue of Science Express, the advance online publication of the journal Science.

“This species has figured out a clever way to pass on genes with gender-specific effects on fitness,” said Bob Cox, the lead author on the paper and a post-doctoral researcher at Dartmouth. “Usually, when natural selection pulls genes in different directions for each gender, the species faces an evolutionary dilemma. But these lizards have solved this puzzle, they’ve figured out how to get the right genes into the right gender.”

Cox’s co-author is Ryan Calsbeek, an assistant professor of biological sciences at Dartmouth. 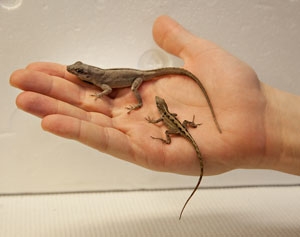 The male of this species can be two to three times the mass of the female, but the females seem to be in control of the genetic destiny. (photo by Joseph Mehling ’69)

By manipulating opportunities for females to mate with males of different sizes, the researchers determined that females prefer larger males. But, when the choice of partners was limited to small males, females minimized the production of sons.

The researchers explain that the genes that make males more fit are often different from the genes that benefit females, which presents a conundrum because males and females share most of their DNA. The valuable traits for one gender are not always the same for the other. “In an evolutionary sense, what’s good for the goose is not always good for the gander,” said Cox.

In these lizards, however, mothers can enhance the fitness of their offspring by manipulating their gender depending on the size of the father. To demonstrate this, Cox and Calsbeek measured the survival rates of sons and daughters over eight months when released to their natural habitat in The Bahamas.

“As we predicted, the survival of the male offspring increased if they had large fathers,” said Calsbeek. “But, we found that the survival of the daughters was not influenced by the size of the father. This suggests that the genetic benefits of large size are specific to sons.”

How do females control the gender of their progeny? “That’s the big question at this point,” said Cox. The researchers will continue their studies to learn more about the mechanisms involved in this most fundamental of all evolutionary processes, the struggle to pass on advantageous genetic material.