After Haiti was devastated by an earthquake on January 12, Alexandra Schindler ’10, Maura Cass ’10, and Frances Vernon ’10 pulled an all-nighter to brainstorm a student relief response.

“We knew Dartmouth’s administrators would respond quickly to the tragedy because of President Kim’s background in global health and his connection to Partners in Health (PIH),” says Vernon, Dartmouth’s student body president. “And we wanted to try to match the caliber of the their response.” 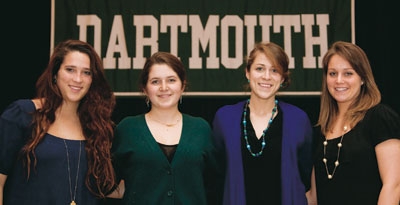 The result of their session was Students at Dartmouth for Haiti Relief (SDHR). Since its creation, SDHR has helped mobilize more than 350 volunteers into eight committees engaged in everything from staging a campus fundraising dinner and benefit concert to helping collect non-medical supplies for the 25 medical personnel from Dartmouth-Hitchcock Medical Center (DHMC) who traveled to Haiti to care for earthquake victims.

RuDee Lipscomb ’08, organizer of the Compàs Haiti Relief concert held in Spaulding Auditorium on January 31, said prior to the show, “The committee members and I have barely slept in the last four days. Everyone we contact about this project, from administrators to students and faculty, are so enthusiastic about getting involved. It’s truly remarkable. I deeply hope that we can make a tangible difference for the Haitian people. We are sending a video of the concert as well as a community mural to PIH as a sign of Dartmouth’s solidarity and support.”

Led by Jasmine Daniel ’10, students worked from noon to midnight on January 30 to paint this 12-by-5-foot mural that will be installed at a Partners in Health (PIH) clinic in Haiti. It was sent along with a video of the January 31 student-organized Compàs Haiti Relief concert. Students at Dartmouth for Haiti Relief has raised more than $200,000. (photo by Joseph Mehling ’69)

In addition to the more than $20,000 SDHR has raised on campus, the group has also raised more than $190,000 in an online collegiate challenge for PIH, the nonprofit co-founded by Dartmouth President Jim Yong Kim. SDHR’s organizational and fundraising model is now being utilized by college student leaders nationwide, as noted in a recent article by USA Today.

“We’ve been in contact with college leaders across the country. We want other schools to learn from our model and contribute to the effort just as much as we have,” says Cass. “If another school looks at what we’ve done, we want their sentiment to be ‘Hey, Dartmouth did it, so can we.’ We’ve shared our model for organization with others, and we will continue to be involved with this so that our mobilization is just the beginning of the national effort.”

A student-led educational initiative is also underway. According to Ibrahim Elshamy ’09, point person for SDHR’s Long-Term Education Committee, the group will screen several Haiti documentaries, publish informational materials about the republic, and produce a timeline on Haiti’s history that will be exhibited in the library. “A project is also starting up to learn about Haiti’s massive debt and reparations paid and to take action around this issue,” Elshamy adds.

While student leaders realize there is still much work to be done, they are energized by the response of the Dartmouth community. “Frances, Maura, and I and the rest of the committee leaders cannot begin to express our gratitude to those who have donated their time and funds to SDHR and PIH in the past weeks,” says Schindler. “It’s great that Dartmouth is willing to give back so generously.”