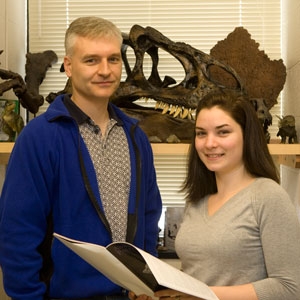 A recent study published in the March 14 issue of the journal Nature features the work of Dartmouth’s Associate Professor of Biological Sciences Kevin Peterson. The study outlines the genome sequence for Hydra magnipapillata, a simple freshwater animal distantly related to the jellyfish, and compares the genome to other simple, early animals, like the sea anemone. The research contributes to ongoing studies on regeneration, stem cells, and patterning.

Peterson, one of many authors on the paper, worked specifically on mapping the microRNA (miRNA), essential in controlling gene expression. At Dartmouth, Peterson worked with graduate student Alysha Heimberg, and they brought North Carolina State University graduate student Benjamin Wheeler in to the project; both are co-authors on the paper. The three of them analyzed the microRNA complement of Hydra both bioinformatically and experimentally, and within a proper phylogenetic context.

The paper, titled “The dynamic genome of Hydra,” has more than 70 authors representing organizations worldwide. In the paper, the authors note that “[T]he sequencing of the Hydra genome has revealed unexpected relationships between the genetic makeup of the animal and its biology. .... The availability of the Hydra genome sequence and methods to manipulate it provide an opportunity to understand how this remarkable animal evolved.”

The team discovered Hydra have about the same number of genes as humans, sharing many of the same ones. They also found genes linked with Huntington’s disease and with characteristics seen in Alzheimer’s, suggesting the possible use of Hydra as a research model for these two diseases.

However, Peterson adds, “Simple organisms possess relatively few miRNA. As a comparison, Hydra only has 18, whereas humans have well over 700 miRNAs.” Peterson’s previous work also shows a correlation between the number of miRNAs and the complexity of the organism, indicating a connection between miRNAs and the evolutionary process.