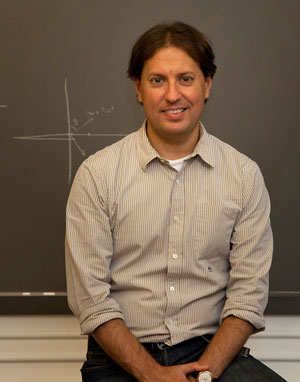 Torresani’s award supports his project titled Learning Models for Scalable Content-Based Image Retrieval, which aims to develop algorithms that can search, match, and retrieve images from enormous collections of photos, like those on the Internet. Unlike traditional text-based image search engines, which find pictures by matching keywords and tags, Torresani’s algorithms will use a photo, chosen by the user, as an example to find images with similar visual content in the database.

“Despite the advances in the fields of computer vision and information retrieval, content-based image search today is still limited,” says Torresani. “My research aims to create a radically new type of image search engine, capable of retrieving Web images matching the high-level visual content of a user-supplied photo in fractions of a second. I will design machine learning methods that learn efficient visual similarity models. The algorithms will learn from user-provided labels indicating the presence of similar visual content in training images, but not its location, thus requiring a minimal amount of human supervision.”

He explains that, if successful, his research could produce new technology to automatically search and organize personal photos, therefore relieving users of time-consuming manual searching through numerous folders and image files. He also plans to use the NSF award to support his teaching through the creation of a “Computer Vision” course for both undergraduate and graduate students.

In addition to Torresani and Erives, other Dartmouth professors who have been recently honored with NSF Career Awards include Devin Balkcom, Christopher Bailey-Kellogg, Amit Chakrabarti, Tanzeem Choudhury, Fabio Pellacini, Sean Smith, and Afra Zomorodian in the computer science department; Reza Olfati-Saber and Petia Vlahovska at Thayer School of Engineering; Kristina Lynch, Barrett Rogers, and Robert Caldwell in physics and astronomy; Robert Grubbs in chemistry; David Peterson in the linguistics and cognitive science program, and David Bucci in psychological and brain sciences.