TEDx at Dartmouth on Saturday, April 17

The organizers of TEDx Dartmouth aren’t quite sure how many hours they’ve put into this groundbreaking event. 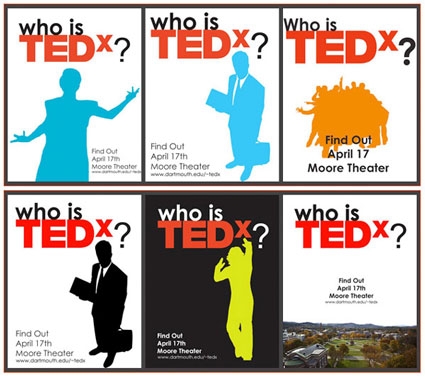 “It’s not one of those extracurriculars you can quantify,” Clark Moore ’13, vice president of TEDx at Dartmouth, said. “It’s definitely a life event.”

Despite the immense workload, the three-person management team of this special event has been thrilled to see the project take shape. TEDx is based on the popular TED Talks, and TEDx events have cropped up on a few campuses nationwide. Dartmouth’s TEDx will follow the format outlined by the TED organization. Presentations will be very compact, lasting no longer than 18 minutes, and each presentation will be accessible to the average listener. Organizers plan to post video of the event on YouTube.

TED, by the way, stands for Technology, Entertainment, Design. At Dartmouth, 14 speakers from a variety of disciplines will speak over the course of several hours. A sampling: History major James Shinn ’11 will speak about early modern London. Turning prisons into colleges will be the topic for Senior Philosophy Lecturer Larry Crocker. Director of the Hood Museum Brian Kennedy will cover visual literacy. Developing computer games for social change will be discussed by Mary Flanagan, professor of film and media studies and the Sherman Fairchild Distinguished Professorship in Digital Humanities.

Moore, fellow vice-president Sarah Cashdollar ’13, and president Branko Cerny ’13 are working with sixteen other students to carry out the TEDx conference at Dartmouth on April 17, an idea hatched by Cerny after coming to Dartmouth from the Czech Republic.

“I realized that what’s great about American schools and schools like Dartmouth is that you can pursue large projects on your own and they’ll support you,” Cerny said. “TEDx just seemed like the perfect thing to bring together.” 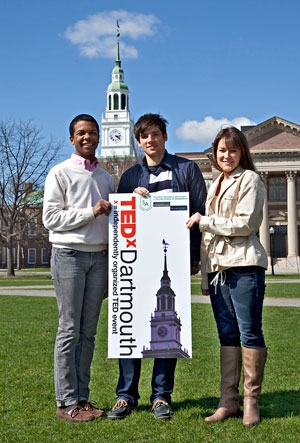 “Sarah and I got involved because of Branko,” Moore said. “This is very much Branko’s brainchild. We’ve been trying our hardest to make Branko’s vision come true in the most practical way possible.”

Cerny first started getting other people involved in the project back in October, and Moore and Cashdollar joined soon after Cerny received his first batch of funding, which came from the Dartmouth Student Assembly in January. The SA and the Abbot Technology Leaders Program at the Thayer School of Engineering have been the main sponsors for the event, while the Leslie Center for the Humanities, the Nelson A. Rockefeller Center for Public Policy and the Social Sciences, and the Tucker Foundation have provided additional funding.

“You don’t have to have a physics background, for example, to understand the physicists that are speaking,” Cashdollar said.

“This is a way to bring all of campus together under this unique synergy of knowledge,” Moore added.

This event is just the start of an initiative to bring the campus together, the team said. They plan to make TEDx an annual event, and they already have the lineup of speakers for next year.

“[TEDx is] telling the Dartmouth community something about itself that we tend to forget,” Cashdollar said. “Dartmouth really is one of these schools that has amazing professors that people aren’t even aware of. This project has opened my eyes to so much.”

Although all three of the key organizers are first-year students, none of them feel that being a freshman has made the project any more difficult.

“Everybody was so open,” Cerny said. “These people just care so much about the project. That’s what makes Dartmouth special. We’re just freshmen but people have the time to help us.”

The team is grateful to its support system of graduate students and upperclassmen, who doled out realistic advice and “kept our feet on the ground,” Cashdollar said. But there were times when the feisty freshmen wouldn’t take no for an answer.

“We just knew we could do it, and we’re doing it,” Cerny said resolutely.