In the Classroom: Professor N. Bruce Duthu ’80 on Tribal Sovereignty and the Law

The 21 undergraduates in “Native Americans and the Law” taught by N. Bruce Duthu ’80 learn quickly that it’s important to come prepared to class. The Samson Occom Professor of Native American Studies (NAS) is likely to call on students with specific questions, such as, “How would you describe the reasoning of the Johnson v. M’Intosh Supreme Court case of 1823?,” and he’ll expect an answer.

“While at first it’s a bit intimidating, I think we all benefit from Professor Duthu’s style of teaching,” says Karen Doster ’11 of Basking Ridge, N.J., who is majoring in government with a public policy minor and considering law school. “It makes class more engaging, and he encourages us to question what we are reading and form our own conclusions about the cases.” 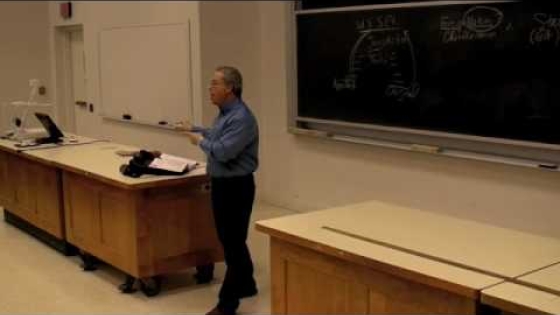 Interest in the course was evident during a recent visit, when attentive students took notes (half in notebooks, half on laptops) and frequently raised their hands to make a comment or ask a question. Duthu referred to his handouts, chalkboard maps, and specific cases in the book, American Indian Law: Cases and Commentary and then followed up with summary points, such as: “The Johnson case was critical because the Indians were presented as a people who needed the tutelage of a ward. But the question was, when does this guardianship end?”

Duthu tied the material to what might connect with his audience—he compared some terms of American Indians’ rights to that of students living in dormitories, who “can hang pictures but can’t knock down walls.” He also noted that the Appellant chief lawyer in the Johnson case was Dartmouth’s own Daniel Webster, Class of 1801. 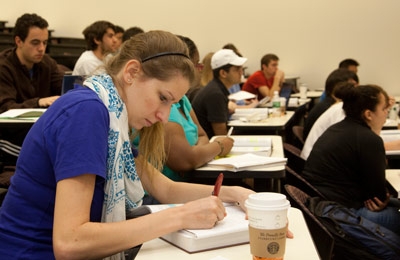 There are more than 560 recognized American Indian tribes in the United States, and they are the only ethnic group in the nation to have legal claims to land. But what American Indians can and can’t do on the land is often a point of contention, and this class focuses on those landmark legal debates.

These historic decisions inform modern controversies, such as the development of casinos in Massachusetts, property taxes in upstate New York (City of Sherrill v. Oneida Indian Nation, 2005), or the jurisdiction of the Navajo Supreme Court. “Whatever the issue, the thing we always come back to is sovereignty,” says Duthu.

And as Duthu points out to the class, the issue of sovereignty is not one unique to the United States—the rights of Indigenous people are considered by countries around the world, including Australia and Canada. “We’re not the only ones dealing with it, but we can set the standard for developing conventions in treaty making,” he says.

Hunter Cox ’11 of Alexandria, Virginia, said he enrolled in the course because he enjoyed ”Native American Law and Literature“ taught by Duthu and also because he is considering working in Indian Affairs in Washington, D.C., after he graduates. Cox got a taste of the government work during a Rockefeller Center internship with the Committee on Indian Affairs in fall 2009. A member of the Prairie Band Potawatomi Nation, he is a government major and Spanish minor who is interested in “how indigenous people can to work within a political system and at the same time preserve their cultural identity.” Like Duthu, Cox views his work through a global lens. He has lived with the Aymara people of Bolivia and the Maori of New Zealand, and will draw on those experiences to write his senior thesis about indigenous rights in Bolivia. “It’s fascinating to me that indigenous people around the world have the same challenges,” he says.

Studying the law at Dartmouth

About half the students in class are interested in law school, says Duthu, who taught at Vermont Law School for 17 years before joining the Dartmouth faculty. He is a member of a Legal Studies Group, which consists of Dartmouth faculty members who promote opportunities for students to learn more about the law. The group’s activities, which are supported by the alumni group the Dartmouth Lawyers Association, includes an annuallaw day and three lectures throughout the year.

Duthu’s latest book, American Indians and the Law, tackles both legal issues and the public’s conceptions of the American Indian culture. Duthu notes in the book that one of America’s most enduring myths is that of American Indians in an idealized past. He writes: “The ‘enduring and thriving’ or ‘rich and powerful’ Indian tribe is not a familiar or comfortable concept in the popular imagination.”

There are about 18 Native American studies courses offered each academic year taught by six faculty members. Approximately 25 students major in NAS each year, and they go on to diverse careers including teaching, finance, and to positions in federal or tribal governments. The U.S. Government’s current liaison with Indian Tribes is Jodi Archambault Gillette ’91, who majored in government and Native American Studies.
Written by
Steven Smith
Share this
FacebookTwitterEmail
Quoted
Quote