Founded in part for the “instruction of Youth of the Indian Tribes” in 1769, Dartmouth’s past is entwined with that of America’s indigenous peoples. In The Indian History of an American Institution, Colin Calloway, the John Kimball Jr. 1943 Professor of History, documents this shared history for the first time. 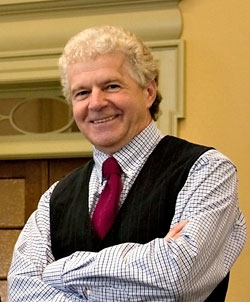 Dartmouth President Emeritus James Wright—himself a historian—encouraged Calloway to write the book, which was published in May 2010 by the University Press of New England. “The wait for this book has been worthwhile for it is clear that the subject was waiting patiently for Colin Calloway,“ said Wright, who is the Eleazar Wheelock Professor of History.

Calloway spoke about the book with Dartmouth’s Office of Public Affairs in May. The Valley News also interviewed Calloway about the book.

What do you want people to know about Dartmouth’s relationship with Native Americans?

“My sense is that people know something about Samson Occom’s role in founding the College and are aware of the College’s efforts in Indian education since the 1970s. I hope the book will help to draw attention to the years between, when Dartmouth maintained a limited and sometimes reluctant involvement In Native education and when Indian students, though few in number, continued to attend the school.

“It’s also important to recognize that the College’s relationship with Native Americans has involved Dartmouth people in Indian country and Indian affairs as well as Indian students on the Dartmouth campus.”

How has that relationship changed over time?

“Originally and for many years, the education that Native students received at Dartmouth was predicated on the assumption that Indian ways of knowing and learning had nothing to offer and that Indian ways had to be eradicated.

“Now, students, and hopefully professors, understand that education is a two-way street and that Native students will likely use what they learn here to help preserve Indian culture, defend Native rights, and promote Native sovereignty.”

The book has just been released—what have you heard from the community?

“My Native colleagues have been generous in their comments, but they always are. The few students I’ve talked to seem pleased to see it, but we’ll have to see how it stands up over time.”

Did you learn anything surprising while doing research for this book?

“Perhaps the most interesting thing was to discover just how much information could be gleaned from the College’s financial records.

“In the early years, Dartmouth had to document virtually every penny spent on Native students. This reveals not only the names of individual students, but also insights into their lives at Dartmouth. They incurred expenses for firewood, candles, lamp oil, books, pencils, buckles, shoes, laces, breeches, shirts, mending clothes, laundry, travel—and sometimes for breaking windows!”