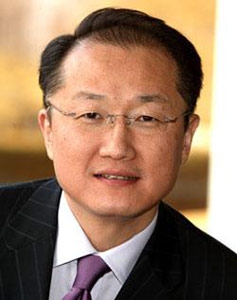 Dennis Charney, MD, dean of Mount Sinai School of Medicine and executive vice president of academic affairs of the Mount Sinai Medical Center, conferred the honorary degree. Charney’s citation recognized President Kim for “seeking solutions to some of the world’s biggest challenges. Your drive to turn the impossible into the possible has brought hope and healing to regions long ravaged by disease and poverty.”

The Mount Sinai School of Medicine has more than 3,400 faculty in 32 departments and 15 institutes, and ranks among the top 20 medical schools both in National Institute of Health funding and by U.S. News & World Report.

President Kim said, “This is a wonderful honor that I appreciate very much — partly because, in the course of recognizing work I’ve done, the citation for the degree notes that I am the first physician to become President of Dartmouth College. So this award also reflects recognition of Dartmouth’s significance in the world.”

Below is the formal citation from Mount Sinai for President Kim:

Doctor Jim Yong Kim. An internationally acclaimed physician, researcher, humanitarian, and educator, your leadership in the fight against infectious diseases that disproportionately burden the poor has inspired millions around the world.

You never shied away from seeking solutions to some of the world’s biggest challenges. Your drive to turn the impossible into the possible has brought hope and healing to regions long ravaged by disease and poverty. Wherever you have gone you have broken new ground and have had a profound impact on several prestigious institutions and organizations, including Partners in Health, the World Health Organization, Harvard Medical School, and now Dartmouth College as that university’s first physician president.

Your expertise in both the fields of medicine and anthropology has advanced our understanding and practice of global health. While a student at Harvard, you co-founded and helped establish Partners in Health, which now serves as an international model for the delivery of care to impoverished communities. Partners in Health was created based on the simple belief that medicine can be more effective when physicians work closely with underserved populations to treat disease and alleviate poverty. Partners in Health has grown tremendously and now collaborates with communities in the United States, the Caribbean, South America, Europe, Asia, and Africa. The impact of your work continues: Nearly 20 years ago while in Lima, Peru, you developed the first large-scale treatment program for multidrug-resistant tuberculosis, a program now used in more than 40 nations.

In 2004, you went to the World Health Organization to serve as Director of the Department of HIV/AIDS where you pushed to get life-saving antiretroviral drugs to millions of patients in the developing world. This groundbreaking program, known as the “3-by-5” initiative, was a success and changed the global approach to scaling up HIV/AIDS treatment and prevention programs.