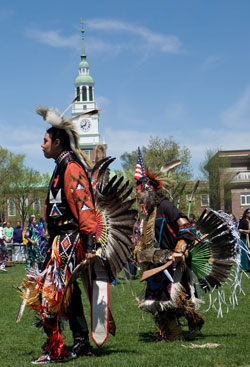 The 2010 Pow-Wow is scheduled to begin at noon Saturday on the Dartmouth Green. (photo by Joseph Mehling ’69)

Presenters will speak on Hanitchak and Mankiller’s behalf and there will be an honoring song for both honorees.

Mankiller, who was the first female Chief of the Cherokee Nation and served as the Principal Chief for 10 years from 1985 to 1995, leaves behind an enduring legacy of activism for Native and non-Native people. Guarding the welfare and rights of Native people, she is known worldwide as a champion of women and minorities. Mankiller was a Montgomery Fellow at Dartmouth from January to March 1996 and also recipient of an honorary degree from the college in 1991.

President Emeritus James Wright will speak at Mankiller’s recognition event, scheduled for 4:30 pm. Saturday. On June 9, 1991, the late James O. Freedman — at that time the 15th President of Dartmouth — said about Mankiller in the citation for her honorary degree:

“A Principal Chief of the Cherokee Nation and the first woman to lead a major North American tribe, you have devoted your talents as statesman, social worker, and community organizer to helping Native Americans overcome the adversity of poverty, unemployment, and inadequate health care.

”As a result of your efforts to establish for the Cherokee Nation an autonomous economic base — through electronics manufacturing, cattle ranching, poultry farming, and rural development projects — thousands of Native Americans are leading lives of greater productively and self-sufficiency.

“For the modern leadership that you have provided to an ancient tribe, Dartmouth takes great pride, as it celebrates the twentieth anniversary of its Native American Program, in awarding you the degree of Doctor of Humane Letters.”

“Michael’s dedication to ensuring the success of Native Americans students at Dartmouth is without a doubt his last legacy,” said Rachel Bond, acting director of the Native American Program. “To have devoted as many years as he did to helping Native students in their personal, social, intellectual, cultural and ethical development is unprecedented. His good works cast a long shadow but I’m honored to be here keeping his commitment alive.”

John Around Him ’12 of Kyle, S.D., is in his second year serving on the organizing committee with several members from Native Americans at Dartmouth (NAD) and this year he responsible for the overall logistics of the event.

“I think Dartmouth students should make a point to attend because this is not an event just for the Native community, but for every student, faculty member, and administrator here on campus,” said Around Him. “I think often Pow-Wow is viewed as an isolated event and this is not the case. Pow-Wow is a community event and we are the community.”

Around Him said this year is especially important because a part of the proceeds from the Pow-Wow will go towards the Dartmouth Job Fund which gives monetary support for those people who have recently lost their jobs at the college due to budget cuts.

For more information on the schedule of events for Pow-Wow, go to: http://www.dartmouth.edu/~nap/powwow/