Hiring is Up for Members of the Class of 2010 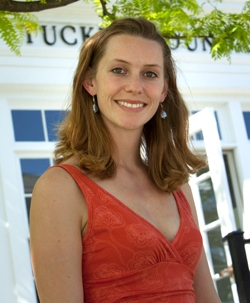 Lily Chesnut ’10 will work at the Montefiore Medical Center in the Bronx, N.Y., thanks to a new alumni-initiated Dartmouth Partners in Community Service program. She was photographed in May in front of the Tucker Foundation. (Photo by Joseph Mehling ’69)

“We have well over 200 entry-level positions still available that are specifically for Dartmouth seniors, and we are still getting calls from employers who are looking to fill positions,” says Wilson. “Part of it is an improved economic climate, and part is that alumni have been more actively involved by posting positions on DartBoard.” Dartboard is Dartmouth’s job posting website for students and young alumni.

Members of the Class of 2010 have accepted a variety of positions, including product manger at Google, financial analyst at ESPN, management fellow at the Cancer Treatment Centers of America, and software engineer at Boeing. Twenty will teach in the Teach for America program. Thirty-seven percent of seniors who responded to a recent survey indicated they accepted full-time employment, and 24 percent noted they planned to attend medical school, law school, or another graduate school. Some have chosen to work for Dartmouth: six to eight students will serve as Presidential Fellows and one will be the manager of the Moosilauke Ravine Lodge.

Karl Holtzschue ’59 helped found DPCS and was instrumental in expanding the program to graduates. “It’s important that Dartmouth encourage students and alumni to participate in community service opportunities,” says Holtzschue, a retired real estate lawyer in New York City. “These new fellowships give students an opportunity to consider community service as a career. I believe strongly in the program.”

DPCS fellow Lily Chesnut ’10, a geography major from South Strafford, Vt., will work with four other employees in the office of community health at the Montefiore Medical Center in Bronx, N.Y.  “Montefiore seemed to value my interests and skills, and they let me know it’s an opportunity to help influence and even create some of their new initiatives,” says Chesnut. “Plus I get to live in New York City and have the support of a Dartmouth network.” (Research completed by a past Montefiore DPCS summer intern, Julia Tse ’09, was published this spring in the journal Pediatrics.)

DPCS fellows will meet regularly with other fellows and alumni mentors, such as Lisa Mendelson Friel ’79, assistant district attorney in the New York County District Attorney’s office. Friel was the subject of the July / August 2009 Dartmouth Alumni Magazine cover story.

Career Services and the Tucker Foundation collaborated to promote these opportunities and provide structure to the hiring process. Nearly 100 students applied for the fellowships, says Tracy Dustin-Eichler, program officer for national service at the Tucker Foundation.

At the Dickey Center for International Understanding, Director Ken Yalowitz says he has seen an increase in the amount of student interest in foreign service. “I’ve been here seven years, and it’s the highest now that I can remember,” says Yalowitz, former U.S. Ambassador to Belarus and Georgia. “I think part of it is due to the constricted job market, but also students are looking to make a difference on an international scale, which of course I’m delighted with.”

Yalowitz says he’s talked with about six seniors including Nathan Caron ’10 of Biddeford, Maine, a double major in Russian languages and literatures, and philosophy. Caron says, “I really enjoyed my experience as an [Dickey funded] intern in management the U.S. Consulate in St. Petersburg, Russia, and I’d like to pursue this work as a career.” Caron notes that he is also applying to law school in case he is not accepted (only about 4 percent of foreign service applicants pass the written and oral examinations.)

Wilson of Career Services notes that the recently completed 2009 post-graduate survey is now available for viewing online. The survey includes information such as most frequently attended law and medical schools, most common field of employment (education, followed by consulting and finance), and geographic location (20 percent in New York City).