And to Think That It Happened at Dartmouth 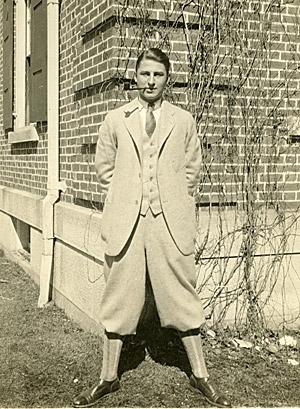 Geisel as a student in 1925. (photo courtesy Dartmouth College Library)

In 1937, in the midst of the Great Depression, dozens of publishers rejected And to Think That I Saw It on Mulberry Street, the first children’s book by Theodor Seuss Geisel ’25 (Dr. Seuss). But not Marshall “Mike” McClintock ’26, Geisel’s Dartmouth classmate and an editor at Vanguard Press. Vanguard produced an advertisement for the book that read: “This is the start of a parade that will take you places!”

To thank McClintock, Geisel not only dedicated the book to McClintock’s wife, Helene, but he renamed the book’s main character after their son, Marco. In doing so, “Geisel simply strengthened the Dartmouth ties that had formed fifteen years earlier,” writes Professor of English Donald Pease in his new biography about one of Dartmouth’s most famous alumni.

Pease’s book is a narrative of Geisel’s life and career, from his upbringing as the son of a brewer in Springfield, Mass., to his time at Dartmouth (see below), to the publication of Oh the Places You’ll Go in 1990, a year before his death. Pease sheds light on the circumstances and events that made Seuss a global phenomenon—The Cat in the Hat alone is available in 20 languages and has sold more than 250 million copies worldwide.

Geisel’s “defining Dartmouth experience,” says Pease, was writing for the Jack-O-Lantern, Dartmouth’s humor magazine that at that time was sold in newsstands in Boston and New York. “The Jack-O-Lantern usurped the classroom as the space in which he received the most valuable instruction,” writes Pease. Classmates would find Geisel “asleep in the magazine office with his head facedown on the typewriter.”

At times unsure of his talents and future plans, Geisel was supported throughout his life by a coterie of friends he met at Dartmouth, including Norman Maclean ’24 (author of A River Runs Through It), Alexander Laing ’25 (who became a Dartmouth English professor), Donald Bartlett ’24 (who was a Rhodes Scholar, like Geisel), and Whitney Campbell ’25.

Pease writes: “Ted’s Dartmouth classmates would become lifelong friends, a reliable audience for his art, honorary siblings, and the role models against whom he measured his own ambitions.”

Seuss lives on at Dartmouth today, where admissions tour guides are quick to mention him, students in Baker Library study underneath his portrait by Everett Raymond Kinstler, creative writers still produce the Jack-O-Lantern, and newly arrived students eat green eggs and ham (in honor of the eponymous book by Geisel) at Moosilauke Lodge on First-Year Trips. 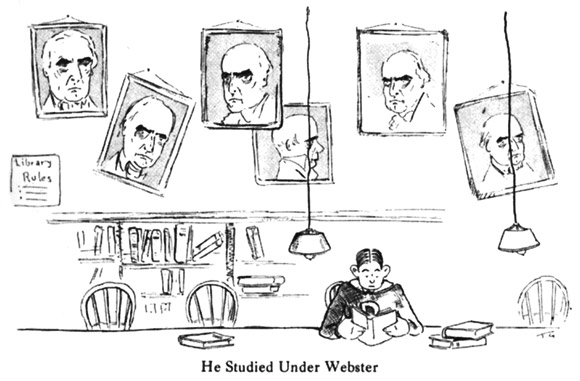 In this January 1924 cartoon for the Jack-O-Lantern, Geisel’s subject is another famous alumnus— Daniel Webster, Class of 1801. The illustration at the top of this page is also by Geisel. (courtesy of Dartmouth College Library)

The title of Oh the Places You’ll Go (which is still on Amazon’s bestseller list) was a common greeting at Dartmouth. It “served as the verbal equivalent of a handshake,” writes Professor Pease.

Geisel marked the date he was named editor of the Jack-O-Lantern—May 15—in the book Horton Hears a Who, which was named after Horton Conrad ’25. When Geisel lost his editorship (due to a rooftop drinking incident) he went on to secretly write using pseudonyms, including Seuss—his mother’s maiden name.