Board Chair Ed Haldeman ’70 Reflects on His Term

When President Jim Yong Kim spoke about leadership in a Washington Post video this year, one of the influential leaders he cited was Ed Haldeman ’70.

“This is a man who has been so successful in his life, he didn’t have to do any other job,” President Kim said of Haldeman, the former president and CEO of Putnam Investments, and since July 2009, CEO of Freddie Mac. “But he took on Freddie Mac because he thought this was something he had to do for his country.” 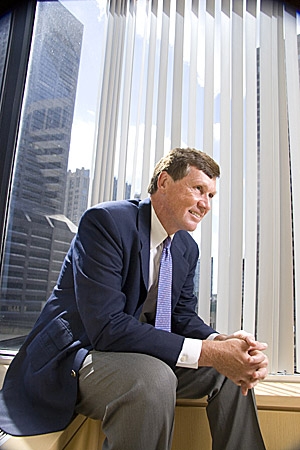 Ed Haldeman ’70, CEO of Freddie Mac, steps down after three years charing Dartmouth’s Board of Trustees. (photo by Mark Ostow)

A May 17, 2010, story on Trustee Ed Haldeman, CEO of Freddie Mac, USA Today described him as “... a soft-spoken leader who savors a challenge and has a reputation for turning around companies that have taken a bruising in the public eye.”

“Ed has been an excellent chair, skilled at directing a discussion in a way that surfaces all key issues,” says fellow Trustee Pamela Joyner ’79. “He was able to orchestrate and manage effective discussions that included a broad range of views.”

Dartmouth Now talked with Haldeman about the highlights of his chairmanship.

What are the overall principles with which you approached the job of chairing the board?

“The number one principle was to help the board and the president always do what was in the best interest of Dartmouth over the long term. Number two was to try to make the board as visible and transparent as possible; to make sure that the board was connected to our constituencies. The third principle was to try to treat everyone with respect and civility even if we disagreed on an issue.”

What were the main challenges the board faced during your tenure as chair?

“One of them was searching for and recruiting a new president, which is one of the most important functions of a board. And with the guidance of Al Mulley ’70, who I asked to lead the search committee, we had a wonderful search process that led to a wonderful choice. The second challenge was the transition from one administration to another. You have to make sure it goes smoothly and well.

“A third challenge was the budget issues that we dealt with in the last year of Jim Wright’s presidency and the first year of Jim Kim’s presidency. Certainly those expense reductions were not easy. They were led by the president, but the board supported the president and helped make difficult decisions that were necessary for us to get the endowment spending rate down to a sustainable level.

“And, I think we have survived a controversy over governance. The board felt it needed to enlarge its size and thought that was in the best long-term interest of the College, but clearly there were many people who didn’t agree with that decision. But, I think we’ve worked through that issue over the last three years.”

What’s the key to running an effective meeting?

“You need to understand which issues have to lead to an action. When you’re running a meeting there are all kinds of issues and reports and not all of them need a decision or an action at that time. But some do. And you have to make sure that the group comes to a decision so an action can be taken. You also have to encourage participants to express their views crisply and only once.”

Why have you been willing to take on such challenging positions, both professionally and as a trustee?

“I took on the chairmanship fully knowledgeable that there would be some difficulty. I have been conscious of taking on roles where I felt I could add value or make a difference. I seem to want to be in situations where change is being considered or is required.”

The late Russell Dilks ’51 encouraged you to come to Dartmouth from the Philadelphia area and also mentored you. Have you established a similar relationship with a Dartmouth student?

“I have, with a young man named Damaris Walker ’09. He first came to Dartmouth as a Philadelphia high school student participating in the Summer Enrichment at Dartmouth program. He then enrolled as an undergraduate and just finished his first year at Yale Law School.

“We met completely by happenstance when a longtime employee of my family’s small business in North Philadelphia fixed a flat tire for Damaris and heard him talking about Dartmouth. He asked Damaris, ‘Do you know the Haldemans?’ Damaris said, ‘Well yeah, he gave some money for a building.’ So they exchanged e-mails, and I contacted Damaris, and we got together for dinner. He’s met all my family and we stay in touch. This is someone I really connected with who’s from the same neighborhood my family is from. He’s doing really well, and he’s a terrific guy.”

Have you given any advice to your successor as chair, Stephen Mandel ’78?

“We are working closely to make it a smooth transition, but Steve doesn’t need any advice from me. He’s been a very involved trustee. He knows the finances of the College incredibly well and has been involved in every action and activity of the board over the last few years. He’s definitely up to speed.”