Owen and Wagner Collection of Australian Aboriginal Art represents styles both traditional and contemporary, artists from remote Outback communities as well as major metropolitan centers, and spans six decades of creative activity. The objects come with documented provenance and, in many cases, explanatory material that will form the basis for their scholarly interpretation.

As the collectors point out, “We wanted to represent the artistic traditions that had grown out of ceremony and myth, but also the engaged and innovative work created by art school-educated urban Aboriginal people from the metropolitan coasts.”

The contemporary Aboriginal art movement emerged in about 1970 when some senior elders were encouraged to make paintings on boards for sale, using clan designs from their “Dreamings” as they had done on their bodies, sand, wood, and rock for thousands of years.

Owen and Wagner became interested in Aboriginal art upon viewing the “Dreamings”exhibition at the Asia Society in New York City in 1988. Although they had long been involved with the contemporary American art scene, the works that they encountered in “Dreamings”offered an exciting new perspective on what they saw as a dynamic, abstract, and very contemporary art. 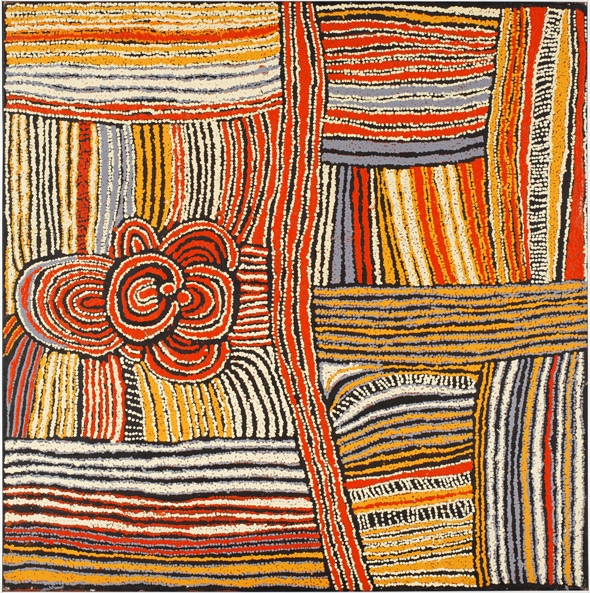 Two years later they made a trip to Australia and bought their first acrylic paintings by Indigenous Australian artists. As their collecting continued, they remained committed to sourcing works of art directly from the Aboriginal communities and their representatives in the capital cities.

The collectors observe, “As we learned more about the history and culture of Indigenous Australians, we also learned of the great historical injustices that had been visited upon them, and saw how those injustices were being played out in the contemporary art market, where unscrupulous, unethical dealers exploited the poverty that the artists lived in to enrich themselves. We therefore endeavored to deal insofar as possible directly with the community art centers that are owned by Aboriginal people themselves and with their representatives in major metropolitan galleries.”

Owen presently publishes a weekly blog, Aboriginal Art and Culture: An American Eye, which he began in 2005.

The collectors were lenders to the 2006 Hood exhibition “Dreaming Their Way: Contemporary Aboriginal Women Painters” and took part in related programming. Based on that experience and the prospects for their collection’s use at a teaching museum like the Hood, they decided to make Dartmouth College the home of their collection.

“We were greatly impressed by the way in which the Hood Museum of Art treated the works as contemporary art rather than as ethnographic evidence,” they recall. “We were further impressed by the reaction of the Dartmouth community, by the way the faculty brought their classes to the show, and by the enthusiastic response to the art by the students. We felt that we had filled in the final piece of our program: to find a permanent home where the fruits of our collecting would be used to further the study of Aboriginal culture and to preserve the great legacy of these modern masters.”

At the Hood, this collection will be used to engage faculty and students, and the broader college community, in the process of teaching and learning with objects. It will also inform the study of art, anthropology, curation, and social history at the College.

Brian Kennedy, director of the Hood (and director of the National Gallery of Australia from 1997 to 2004), comments, “Australian Aboriginal art has been the focus of a sequence of museum shows in the United States over recent years. The future is very bright for this art making tradition, as a celebration of the strength of Australian Aboriginal cultures that, aside from being startlingly beautiful, is culturally profound and enriching.”

The Hood has scheduled a major exhibition and publication about the Owen and Wagner Collection for spring/summer 2012.