Independent study is one of the distinct hallmarks of a Dartmouth education, with more than half of undergraduates receiving nearly 1,000 credits for faculty-directed independent and individualized studies every year.

From studying cricket calls and the mortgage crisis to writing an original play, Dartmouth Now takes a closer look at three projects.

As an economics and government double major, J.R. Santo was naturally drawn to a senior thesis topic that incorporated both disciplines. His inspiration came from a junior-year internship at the Legal Aid Society in his hometown of Queens, N.Y., supported by a grant from the Tucker Foundation. 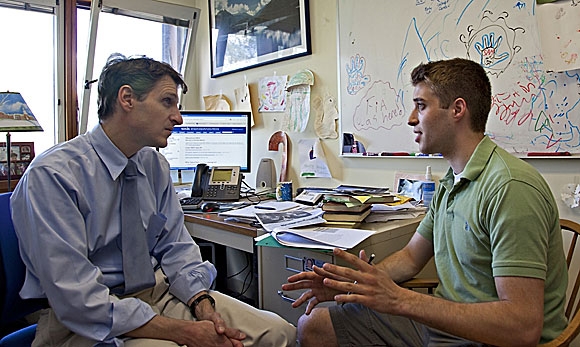 “I worked with homeowners who were in dire financial straits, and who in most cases had falsified income on their loan applications,” says Santo. “I saw all these things that I thought were out of the ordinary, but the attorneys I was working with made it clear that they weren’t. That’s what led me to research predatory lending, and to tackle this from a statistical, empirical standpoint.”

While his thesis is technically in the government department, Santo worked with two advisors, government Professor Joseph Bafumi and economics Professor Bruce Sacerdote ’90. “It’s an incredible opportunity to have two professors who are willing to sit down and talk to you for two hours at a time,” he says.

A grant from the Office of Undergraduate Advising and Research allowed Santo to obtain mortgage lender data from five states, which meant a lot of time with statistical software. “It was really the personal stories of those people I had met at the Legal Aid Society, the people behind the numbers, that kept me motivated through that statistical analysis.”

Of his findings, Santo says, “One of my main conclusions is that smaller mortgage lenders had more responsibility for the mortgage crisis.” Unlike banks, he says, mortgage lending companies “have no direct incentive to be accountable for the mortgages they originate. There was an influx of lenders who had the moral hazard not to care about the success of the loans they were originating.”

As a Senior Fellow, Lou-Lou Igbokwe ’10 has spent the past three terms focused full-time on writing and producing a play about the constructions of black womanhood. Her work, Black Girls Anonymous, was performed in Moore Theater on May 27. 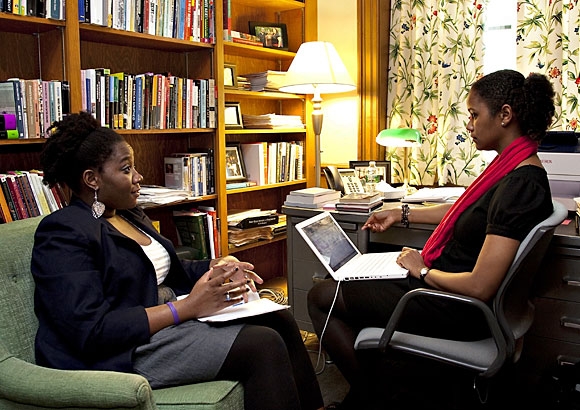 Igbokwe, of Maplewood, N.J., decided to do a Senior Fellowship to combine her interests in theater, creative writing, and African and African American studies, saying, “I felt that everything I’ve worked for needs to come to light my senior year.”

The play explores the varied experiences of four women, touching on issues of race, class, public perceptions, and social expectations. “It asks the question of what does it mean to be a black woman,” Igbokwe explains, “but it is also about who is doing the constructing, and what are our relationships with each other.”

Igbokwe had previously taken three courses with her advisor, Professor Soyica Colbert of the English department. “Each of those classes has deeply informed how I look at approaching theater and representations in theater,” she says.

“Professor Colbert has this really great ability of relating theater and classical works to today. To me it was the meeting of my pop culture interest and also the artist and the social justice person in me. Her work really falls in line with what I wanted to do with my art,” she continues.

“Honestly one of the most fulfilling aspects,” says Igbokwe, “is seeing how important this project is to people. I feel like this has been a long time coming not just for me, but for many others. I’m just really happy I’ve had the chance to tell some of this story.”

“You might ask ‘Why would I care about a cricket call?,’” says Jennifer Fownes ’11, who spent fall 2009 studying how road noise affects the ability of crickets to communicate. “But it has important conservation implications; there are a lot of crickets out there, and insects are part of the basis of an ecosystem. People have looked at whales and birds and frogs in terms of noise interference, but measuring ecosystem health depends on a lot more than one large animal.” 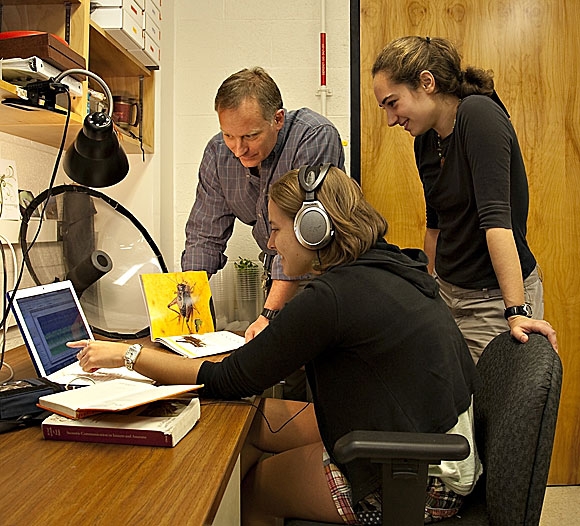 Fownes, of Amherst, Mass., worked on her research full-time during a leave-term in Hanover, with the support of a Waterhouse Independent Research grant. “It was nice to focus really hard on one project, sometimes going to great physical lengths to collect that data,” she says. “Doing a long-term project helps you to reevaluate as you go and get a bigger picture.” Independent research can be challenging though: “You have to drive yourself; you learn a lot about how you work.”

Biology Professor Mark McPeek advised Fownes on her project, and she also worked closely with graduate student Laurel Symes, who has done previous research on cricket communication. “It was fun to work together as a team but also come up with some ideas on my own,” says Fownes.

“A number of people in my lab are asking various questions about how animals attract and select mates,” says McPeek. “Jennifer’s work brings the perspective of how human activities may disrupt this. It’s a great example of how an undergraduate project brings a new dimension to a laboratory’s research program.”

Listen to a recording of a Carolina Ground Cricket, taken by Fownes on Gile Mountain in Norwich, Vt., October 8, 2009: Carolina-Ground-Cricket 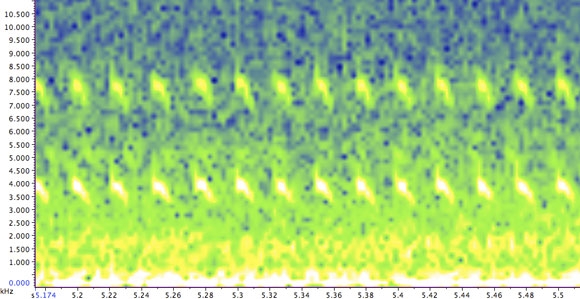 A spectogram of the above Carolina Ground Cricket recording. The y-axis shows “frequency” in kHz (or the pitch of the call), while the x-axis shows time. The dominant frequency of the call is the group of yellow-white shapes at a frequency of about 4 kHz. (courtesy of Jen Fownes ’11)

Written by
Jocelyn Krauss
Share this
FacebookTwitterEmail
In the News