Dartmouth researchers were awarded $15.6 million during December 2009 and January 2010, including $10.4 million in new and competing awards.  View the complete list of awards for December and January, as reported by the Office of Sponsored Projects. Here, Dartmouth Now spotlights four investigators and their work.

Looking for needles in a haystack: This award funds research in practical monitoring of large networks for security threats and signs of malicious activity, says Bratus. “When a network carries a lot of traffic—which is the case with any production network of a large or medium-sized organization—the sheer amount of traffic allows attackers to hide in plain sight,” he notes. “We are developing scalable methods of sensing malicious traffic.”

Attackers beware: “The current grant continues a line of research projects that we are conducting at the Institute for Security, Technology, and Society, in Sean Smith’s PKI/Trust Lab, and as a part of the Dartmouth Internet Security Testbed (DIST),” says Bratus. Their over-arching goal is “to study and improve  trustworthiness and security aspects of networks.”

Teamwork: Milcord LLC’s network security researchers, who have done pioneering work on detection of botnets—networks of security-compromised computers—are key partners in this project, reports Bratus.  Dartmouth advisors include computer science professors Amit Chakrabarti, a co-inventor of some of the mathematical methods we are using, and David Kotz, the leader of the DIST project and other network security projects at Dartmouth.  Additionally, Bratus notes, Dartmouth’s Computing Services personnel under the direction of David Bucciero, who operate the College’s VoIP network, collaborate with Bratus on this project and others in Dartmouth’s ongoing Computer Security Initiative (CSI).

Long ago and far away: Fesen’s projects both study of the remains of  two supernovae, exploded stars, whose images have been captured by the Hubble Space Telescope. The first, he says, was a massive star from our own galaxy, which may have been seen by astronomers in the year 1181 CE as a bright new temporary star. Fesen’s team is studying images of  a second, smaller star with the goal of detecting fragments from its inner iron-rich core.

Teamwork: Both projects, Fesen notes, build on work that he has been doing for the past several years. Collaborators include current and former Dartmouth undergraduate and graduate students, as well as colleagues at the University of Colorado at Boulder, and Florida State University.

We are such stuff: “Studying the chemical remnants of exploded stars makes very real the process by which heavy elements are made,” observes Fesen. Those elements, he continues, “eventually enrich the interstellar gas out of which new stars and planets are formed, leading ultimately to us.”

One goal, many tools: Both awards, says Mierke, support the development of “molecular inhibitors of key protein-protein interactions,” agents which will interfere with the process of disease within cells. In both awards , he notes, “We are employing protein engineering, peptide synthesis, and nuclear magnetic resonance for structure determination and compound library screening,” he notes.

Enhancing chemotherapy: Many drug-resistant tumors do not respond to chemotherapy, Mierke explains, because of an overabundance of cFLIP, a cellular protein which blocks the death of cells.  If the process which keeps the tumor cells from dying can be restrained, the tumor cells become more susceptible to the chemotherapy drugs used against them. Mierke is collaborating with Dr Khasvari-Far at Harvard Medical School on the research supported by the first grant, to develop the molecules which will make such tumor cells less drug-resistant.

Fighting neurological disease: Working with Mark Spaller of the Norris Cotton Cancer Center, as well a virologist (Walter Atwood, Brown Medical School) and an x-ray crystallographer (Thilo Stehl, University of Tubingen), Mierke’s second grant targets the progression of JC-polyomavirus. This disease attacks the white matter of the brain during periods of immunosuppression,  he explains, including concurrently with HIV infection or many treatments of multiple sclerosis. 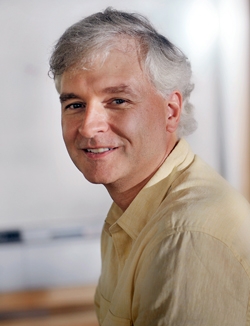 Towards complexity: Peterson, a molecular paleobiologist, focuses his research on the Cambrian explosion, the sudden appearance of a diversity of complex animals about 520 million years ago. This grant, he explains, contributes to that over-arching topic: “Our major goal is to understand the origins of morphological complexity,” he says, “from both a paleontological and molecular perspective, and rooted in proper geologic context and time.”

MicroRNA: “We have established a potentially interesting link between the advent of complexity and small RNA molecules called microRNAs,” Peterson reports. “We are exploring microRNAs in the context of the origin of animals and the transition from simple animals like sponge to more complex animals like us.”