The Dartmouth Symphony Orchestra (DSO) had a special guest on the piano for its winter concert this year: Philip Back ’10, who usually occupied the Concertmaster’s seat in the first violin section.

Back performed Rachmaninoff’s Piano Concerto no. 2 in C minor, op. 18, a piece that requires the “truly remarkable” level of accomplishment that DSO director Anthony Princiotti attributes to Back, who has studied both piano and violin since he was a child. “I love it when a person’s music-making springs from a personal background that is rich and varied,” says Princiotti, “and I can’t think of anyone who embodies that sensibility more than Phil.” (See below for video of Back’s performance.)

A double major in music and philosophy as well as a Dickey Center War and Peace Fellow, Back’s other major commitment on campus has been with Dartmouth’s Reserve Officer Training Corps (ROTC) program. He has participated in three hours of physical training, three hours of classroom instruction, and five hours of outdoor training activities each week. After graduating in June, Back will serve four years of active duty in the Armor branch of the U.S. Army, followed by four years in the Individual Ready Reserve. 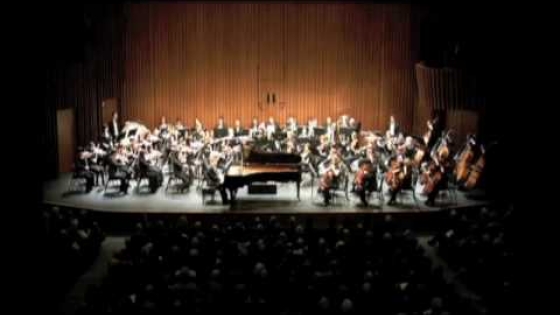 The U.S. Army does boast several musical ensembles including an orchestra, but Back doesn’t plan to pursue music in the service. “That’s another part of my life. Music has always been a hobby. I figured I’d be switching paths in college,” he admits.

The decision to play Rachmaninoff came during his sophomore summer. Back had studied the concerto while on the music department’s Foreign Study Program in London the previous term. Although he had never played such a challenging piece, he wanted to take advantage of the opportunity.

To perform a concert solo, students must audition one year in advance. This meant that Back had to learn the piece and be performance-ready by his junior spring.

“When I started learning it, I was still in doubt of whether I could play it,” Back admits. “But what I learned is that if you just pound away at something, it will get better. It was like magic.”

Piano requires that the musician’s hands play both autonomously and simultaneously. Back learned the concerto step-by-step, building fluency by memorizing short sections at a time.

“There isn’t really anything special,” he explains of his process, which often kept him late in the Hopkins Center until custodians locked the building. “It was just night after night. I had to practice two, three, four hours, every day, from January [2009] until the beginning of May, when I had my audition.”

Will Back miss having music in his life, post-graduation? “I’m not sure yet,” he says, “because I’ve never really gone without it. But that’s part of the reason I played Rachmaninoff. I wanted to do one last thing, where, if I never played again I’d be able to look back and say, I did that, and be satisfied.”