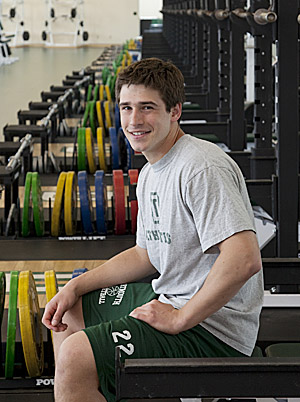 Every spring for the past three years, Robby Pride ’10 has traded his Dartmouth basketball uniform for a Big Green lacrosse jersey, making the transition from playing guard to short-stick midfield, one of the most demanding positions on the field. In a time when two-sport collegiate athletes are a rarity, the Denver native was the country’s lone Division I athlete to play both lacrosse and basketball this year.

“It’s a year-round commitment to play both basketball and lacrosse,” notes lacrosse Head Coach Andrew Towers. “Basketball starts in October but I’d see him in the gym preparing even before that. And then the lacrosse season ends in May. The time, energy, and work that goes into it is just overwhelming. I can’t imagine doing all that and preparing to go to medical school, too. But it speaks volumes about Robby’s character and his ability to focus and work hard.”

Because the two sports are similar in tempo and strategy, Pride says the only adjustments he had to make were in his movement and style of play. “Lacrosse is much more up and down and basketball is side to side,” says Pride. “But the other thing is that lacrosse is much more physical. When we’d start spring basketball workouts after lacrosse, I’d push and shove and not think about it. The guys would ask, ‘Why are you fouling so much? Stop fouling!’”

Pride, a Spanish literature major, was recruited to Dartmouth for basketball and says the sport has always been his first love. He was named Colorado’s Mr. Basketball in Class 3A as a high school senior, but also helped lead Kent Denver School to two state lacrosse titles. After focusing solely on basketball his first year at Dartmouth, and winning the team’s Alvin F. “Doggie” Julian Award for spirit and enthusiasm, the Theta Delta Chi member began to think about playing lacrosse again.

“Sophomore year, right before basketball season started, I was talking to my dad and my roommate, Ian Ferrell, who played on the lacrosse team,” says Pride. “I had watched a few lacrosse games the previous spring and I missed it. My dad said, ‘You don’t want to regret not doing something if you think you can do it.’ So I talked to both coaches and they said, ‘Definitely, give it a shot.’ And it ended up working out.”

According to Towers it more than worked out. “He may be a part-time lacrosse player, but it’s impossible to overstate how good he is,” says Towers. “If they gave out All-American awards for the position of defensive short-stick midfield, he’d be first team.”

Mark Graupe, who stepped in as the interim head basketball coach after Terry Dunn resigned in January 2010, says he never had a better captain in 22 years of coaching. “Robby’s a fantastic leader, a great competitor, and a terrific athlete, so I wasn’t surprised that he was able to play two sports,” says Graupe, who turned over the coaching reins to Paul Cormier in late April. “He’s also a really classy kid who represented Dartmouth well.”

Now that his Dartmouth athletic career has concluded, Pride says he’ll savor the Big Green lacrosse team’s win over No. 6 ranked Cornell at Gillette Stadium this March (the team’s first win over the Big Red in 13 years). Other highlights are basketball wins against Penn and Princeton in February 2009, which marked the first road wins over both schools in one season in 63 years.

He admits that the balancing act wasn’t easy: “Playing two sports at a school like Dartmouth is definitely difficult,” says Pride, who will apply to medical school after spending a year finishing his pre-med courses at the University of Colorado-Denver. “But I wouldn’t change anything. I had so much fun doing it, learned so much about myself, and made friendships that will last forever.”