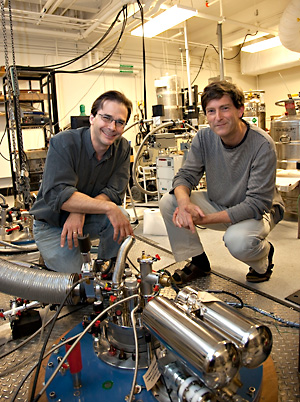 Professors Alex Rimberg (left) and Miles Blencowe with a dilution refrigerator equipped for microwave measurements. A piece of equipment similar to this was used to cool crystal samples to ultra-low temperatures (a few hundredths of a degree above absolute zero) to allow the researchers to observe quantum phenomena. (photo by Joseph Mehling ’69)

Dartmouth researchers have discovered a potentially important piece of the quantum/classical puzzle—learning how the rules of physics in the quantum world (think smaller than microscopic) change when applied to the classical world (think everyday items, like cars and trees).

In a study published in the July 1 issue of the journal Nature, Associate Professor of Physics and Astronomy Alex Rimberg and his colleagues describe one example of the microscopic quantum world influencing, even dominating they say, the behavior of something in the macroscopic classical world. They used tiny semiconducting crystals that contain two separate reservoirs of electrons to explore the different influences of both classical and quantum physics.

One major question in quantum physics deals with the connection between the microscopic and macroscopic worlds. Rimberg explains that scientists know that microscopic objects such as electrons obey the laws of quantum mechanics, while macroscopic objects obey Newton’s laws. Researchers are still learning exactly how classical behavior emerges from quantum behavior as systems become larger and larger.

Rimberg says that the difference in size between the classical and quantum parts of the system described in this paper is really extreme. “To give a sense of perspective, we could imagine that the 10,000 electrons correspond to something small like a flea. To complete the analogy, the crystal would have to be the size of Mt. Everest. If we imagine the flea jumping on Mt. Everest to make it move, then the resulting vibrations would be on the order of meters.”

Rimberg’s future work will use nonlinear superconducting systems, different from using the semiconducting crystals in this experiment, to make very strongly quantum mechanical systems. Nonlinear classical systems can show unpredictable, chaotic behavior; the behavior of the corresponding quantum systems is not well understood. This effort will be a prelude to studying the quantum properties of mechanical resonators that are smaller than the crystals in this experiment, but definitely not microscopic either; they are the things in the murky borderland between quantum and classical regimes.

Rimberg was worked on this study with Dartmouth colleagues Miles Blencowe, Joel Stettenheim, Feng Pan, Mustafa Bal, and Weiwei Zue. They were joined by Madhu Thalakulam and Zhonquig Ji from Rice University, and Loren Pfeiffer and K.W. West from Bell Laboratories.

The research was funded by the U.S. Army Research Office and the National Science Foundation.