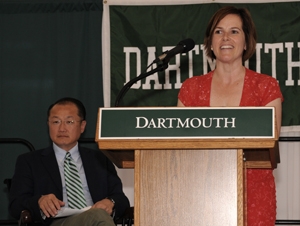 Nearly 400 employees attended Dartmouth’s annual Service Awards Banquet in June to recognize the 492 staff members who have achieved the milestones of 10, 15, 20, 25, and more than 25 years of service. At this event hosted by the Office of Human Resources, Dartmouth President Jim Yong Kim offered his thanks to all who contribute to making Dartmouth run smoothly.

“I want to thank you specifically … [for] all the things you do in the areas of counseling, coaching, academic advising, and health services. All that you have done to support the students outside the classroom, we think that’s incredibly important,“ said Kim. ”We also want to figure out how to be the best that we can possibly be, the best in the United States, at providing those support services.”

Kim also acknowledged the “best cookies on the face of the earth” in Thayer Dining Hall, and the incredible efforts by staff, such as those who work in the residence halls, who make Dartmouth a welcoming place for students. He recognized how the entire Upper Valley community benefits from Dartmouth’s operations, mentioning employees who work at the Hopkins Center for the Arts, the Hood Museum of Art, the library, Safety and Security, and the Norris Cotton Cancer Center.

At the banquet, Vice President and Chief Human Resources Officer Traci Nordberg announced the winner of the Sheila Culbert Distinguished Employee Service Award: Ann Lavanway, a research support specialist in the Department of Biological Sciences. The award recognizes a staff member who has made a difference at Dartmouth and demonstrated exemplary work performance and dedication to the institution. 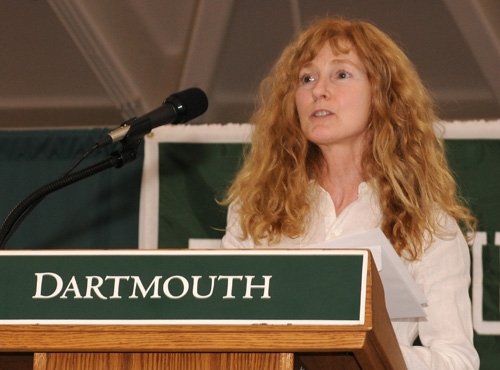 Lavanway started at Dartmouth in 1993 as a technician for the teaching labs in biology, becoming a special instructor a few years later. She briefly worked as a research assistant in the genetics laboratory of Dartmouth Medical School Professor Victor Ambros, and in 2002, she returned to the biological sciences, where she’s been since.

“I enjoy the very diverse nature of my job,” said Lavanway, who lives in Thetford Center, Vt. “I am grateful to the members of the biology department for the encouragement, support, and flexibility they have given me that allows me to do the many disparate tasks that my job entails. I am truly honored to receive the Sheila Culbert Distinguished Employee Service Award.”

Those who nominated Lavanway repeatedly noted her upbeat manner, her willingness to help others, and her superb teaching skills. “I can only hope that I can come back in my next life as smart and effective and organized as Ann Lavanway,” said one colleague.

“The people of Dartmouth have a profound capacity for doing whatever it takes to continually improve this institution. I am impressed by this every day,” said Lavanway.

“Whether my days working at Dartmouth involve keeping the community at bay from trying to pet an approaching moose that decided to walk across campus on a Saturday afternoon, launching the safety boat to rescue a person in duress, being there for a community member who is at their lowest, walking well-beaten campus paths at 2 a.m. to make sure everyone gets home safely, working to build over 100 emergency blue-light phones on campus, or teaching women’s self-defense class (RAD-Rape Aggression Defense), I would not trade any of my experiences at Dartmouth. These all mean a great deal to me.”~Rebel Roberts, Crime Prevention Specialist, Sergeant, Safety and Security, 25 years of service
Image 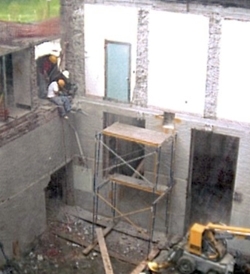 “When Berry Library was being constructed, there were times when it was a bit noisy in my office. Little wonder, because the workmen with the jackhammer in this photo (in the orange helmet) was sitting right outside the back door of my temporary office (the blue door), which was one of the alcoves of the old Reference Room that is now part of the Current Periodicals Reading Room. If I wanted to sneak out of the back door, I had to remember that the first step was a big one.”~William Fontaine, Reference Bibliographer, Library, 25 years of service

“I went to work in the Athletic Department in 1986 and started in the football office under Coach Buddy Teevens ’79 in the fall of 1987. With a lot of hard work by the players and coaching staff, updates to the facilities and strong alumni support, I was part of three Ivy League Championships in 1990, 1991, and 1992. I hope to see those glory days return to Floren Varsity House this fall.”~Cynthia Falzarano, Administrative Coordinator, Tuck School Development and Alumni Services, 25 years of service

“I started at the Hanover Inn, worked there for three years before moving on to Dartmouth Printing and Mailing Services. When I came to DPMS I never thought that I would see 25 years. I have experienced many changes over the years with this department—all the technology changes and the colleagues that have come and gone. I worked in the print part of the shop for three years then moved into the mailroom where I still enjoy doing my work to its fullest.”~Patricia “Patty” Dyer, Mail Services Technician III, DPMS, 25 years of service

“Working in the arts at Dartmouth has been the most incredibly rewarding experience for me. It provides a guaranteed constant inspiration to strive towards the best in human experience. The arts reflect the highest goals and strongest aspirations of human nature, and so, they help us to keep our humanity intact as we deal with the daily struggles of our working lives. The shared experience of the arts helped me and my colleagues to focus on what is truly meaningful about our working lives so that we have been able to come together for the awesome benefit of the Dartmouth College and wider community.”~Jay Cary, Business Officer, Hopkins Center for the Arts, 25 years of service 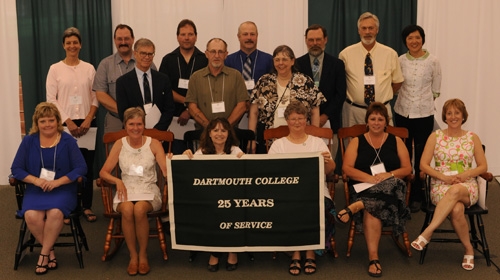 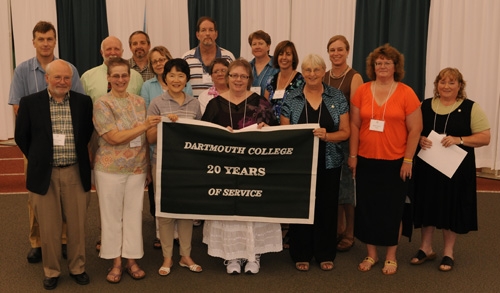 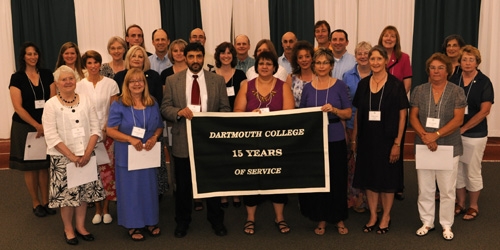