The Arthur Vining Davis Foundations have awarded $200,000 to fund the extension of Dartmouth’s Language in Motion (LIM) program, following a successful pilot run in the 2009-10 academic year. LIM was first developed by Pennsylvania’s Juniata College as a way to share the world with K-12 students, and is now operated by 10 institutions.
Image 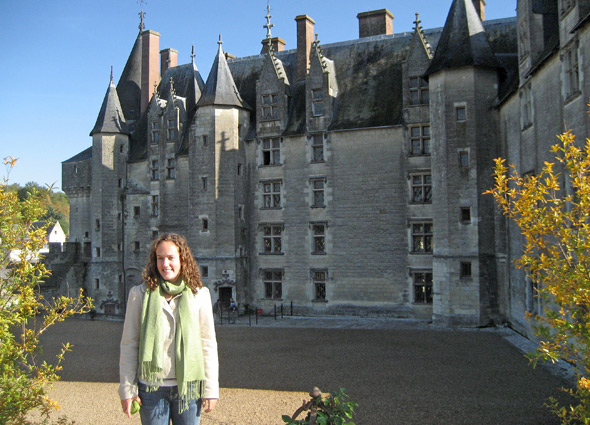 Colleen Olsen ’10 at one of the Chateaux de la Loire in France during the Dartmouth Foreign Study Program in Paris, fall 2008. Olsen spoke about her experience abroad with students at Windsor High School this past spring. (photo courtesy Colleen Olsen ’10)

With guidance from staff from the Tucker Foundation and other campus organizations, Dartmouth students share their experiences in meetings with teachers and via formal class presentations. They commonly discuss their time on study abroad, internships, or service programs that take place outside the United States. International students also share insights on their native countries. In the 2010 winter and spring terms, 14 Dartmouth students worked with 9 high school teachers to deliver more than 30 presentations. 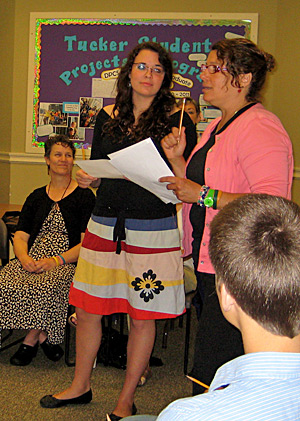 As part of the Language in Motion program, Lindsay Van Landeghem ’11 (standing, left) and Helen Rassias-Miles (standing, right), executive director of Dartmouth College’s Rassias Center for World Languages and Cultures, presented to a group of local high school teachers and students at the Tucker Foundation on June 3. During spring term, Van Landeghem spoke about her experiences in Germany with classes at Stevens High School in Claremont, N.H. (photo courtesy Zeva Levine)

At Windsor High School in June, LIM student director Colleen Olsen ’10 of Avon, Conn., a French major and women’s lacrosse player, talked to students in grades eight and nine about her passion for French and her experience on Dartmouth’s Foreign Study Program in Paris.

“I tried to stress that if you make the effort to learn even a little bit about a language you can learn a lot about another culture,” says Olsen of her presentation, which included vocabulary games, a discussion on immigration in France, and a popular French music video on YouTube. “The time went by too quickly.” Olsen said the experience reaffirmed her interest in teaching, something she will continue this fall as a full-time tutor at the Match Charter High School in Boston.

In a classroom down the hall, Windsor High Spanish Teacher Denise George hosted Myra Sack ’10, a government major and All-Ivy women’s soccer player from Wynnewood, Pa. Among other topics, Sack discussed her experience in Nicaragua with the nonprofit organization Soccer without Borders, where she will work next year.

“Myra grabbed their attention and expanded their curiosity,” says George. “She told the class that it’s possible to continue to study language at the college level, even if you struggle in high school.”

Jay Davis ’90, Tucker’s program officer for school outreach and faculty member in Dartmouth’s education department, is leading efforts to further LIM high school teacher professional development, supporting what the Arthur Vining Davis Foundations term the “multiplier effect” of participating high school teachers. “One of the goals of the program is to have elements of the presentations become consistent components of the curriculum,” says Davis.

LIM is supported by many Dartmouth organizations, including the Rassias Center, which is devoted to creative language learning; the Dickey Center for International Understanding; Off-Campus Programs; the Dartmouth Center for the Advancement of Learning; and academic departments including Spanish and Portuguese, French and Italian, and German Studies.