“It is great to be the first in a series,” New York City Mayor Michael Bloomberg told the crowd of students gathered for his July 16 inaugural Dartmouth Presidential Lecture. “That means until the next one shows up I’m the best you’ve had.” Mixing humor and campus references with discussion of major issues, Bloomberg outlined a four-part “B-Plan” for students, inspired by Dartmouth’s “D-Plan” of quarterly academic terms.
[[{“type”:“media”,“view_mode”:“media_large”,“fid”:null,“attributes”:{“class”:“media-image size-full wp-image-5042 ”,“typeof”:“foaf:Image”,“style”:“”,“width”:“590”,“height”:“295”,“alt”:“”}}]]

New York City Mayor Michael Bloomberg (center) and his longtime companion Diana Taylor ’77 (fourth from left), a Dartmouth trustee, met with students on July 16, 2010. “I really like his candor,” said Zoe Friedland ’12 (third from left). “And whether or not you agree with him, he’s very good at explaining his position.” Also pictured, from left: Jason Goodman ’12, John Rutan ’12, President Jim Yong Kim, Nishreen Ali ’12, Aaron Limonthas ’12, and Kevin Niparko ’12. (photo by Joseph Mehling ’69)

“He’s a very straightforward individual who stands by what he believes, even if it’s controversial,” said Aaron Limonthas ’12, who aspires to become mayor of his hometown of Houston, Texas. Limonthas was among the students who met with Bloomberg at the event.

In his opening remarks, President Jim Yong Kim aligned the series with the College’s former “Great Issues” course, created by Dartmouth’s 12th President John Sloan Dickey in 1947. “Dickey enabled students to reflect on their liberal arts education through real-world problems,” he said. “The Presidential Lecture Series is the first step toward adapting the ‘Great Issues’ concept to a new generation—yours.”

Bloomberg spoke about his own undergraduate years in the ’60s, and the positive changes “ … brought about because Americans—many of them young like you and idealistic—had the courage to fight for their ideals.” 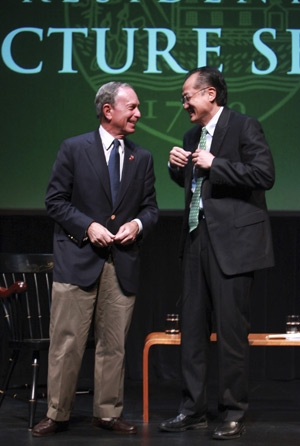 “And over time, unfortunately I think what’s changed in America is people have stopped asking these questions,” he continued. “But I think today we also face enormous challenges, some of them a lot greater than we did back then. Many of which I think we’ve been much too slow to confront: immigration, education, climate change, rising health care costs—the list goes on.”

Some excerpts from Bloomberg’s “B-Plan” to help students make the most of their time at Dartmouth and take on pressing challenges:

Be independent: “You can be a Democrat or a Republican—as a matter-of-fact I’ve been both—or you can be anything else. But never make the mistake of thinking that any particular party has a monopoly on ethics or good ideas. One of the things that never ceases to amaze me in government is how many highly intelligent people are willing to accept a party’s conventional wisdom without asking the hard questions.”

Be innovative: “Being innovative starts with having the guts to take risks. … I think in politics, too many elected officials tend to play it safe, because the conventional wisdom is to try and keep everyone happy. That’s never been the approach that I have taken. I believe if you take on big controversial issues people will respect you for it over the long run. … The key to being innovative is to go where others wouldn’t dare.”

Be generous: “When you talk about service the first group of people that earn my admiration are those in our all-volunteer [military] that are out there protecting us. … We have a freedom today on our college campuses that is being paid for by other people the age of the students on college campuses, who’ve dedicated their lives, have put their lives at risk even, to go overseas and fight this country’s battles. ... I know there are lots of service opportunities here at Dartmouth, and I would encourage all of you to take advantage of it. Not only will it put a smile on your face ... I can just tell you it is great for meeting people.”

Be prepared: “The likelihood of you winding up ten years from now doing what you think you’re going to be doing ten years from now is probably less than one in ten. … You’re going to spend your entire life doing something different than what you think, and the good news is that Dartmouth is preparing you for that. Because while you think they’re individual subjects, what they’re really teaching you to do is to think and to reason, and to build relationships, and that’s what’s going to carry you on.”

“I think the way he connected the D-Plan to his B-Plan was very creative,” commented Ariel Murphy ’12, of Ontario, Calif. Murphy said Bloomberg’s advice to be innovative and take risks resonated with her and that she was “looking forward to President Kim’s speech.”

President Kim will deliver the second lecture in the series, on “habits of the mind” that are key to success, on Thursday, July 29 at 4 p.m. in Moore Theater at the Hopkins Center for the Arts. Visit the Presidential Lecture Series web page for event information, video, photos, news coverage, and more.

“Every one of my positions cuts out half the country. I’m pro-choice. I’m pro-gay rights. I’m pro-immigration. I’m against guns. I believe in Darwin. It’s down to Diana, my mother, and me. And I’m not sure about my mother.”On why he won’t run for U.S. president. Bloomberg’s longtime companion Diana Taylor ’77 is a Dartmouth trustee.

“As a matter-of-fact, my academic record, which I’m very proud of, is that I always made the top half of the class possible.”On remembering to have fun while in college

“If you want to go into public service I would recommend you first become a billionaire, but that’s another issue.”On being prepared for life’s opportunities

“To some extent, you’re known by the enemies you have.”On having the strength to face controversy

By Tiffany Pollack ’10 and Sarah Memmi