Speaking at Dartmouth on July 16, 2010, New York City Mayor Michael Bloomberg told students why he won’t run for president of the United States. 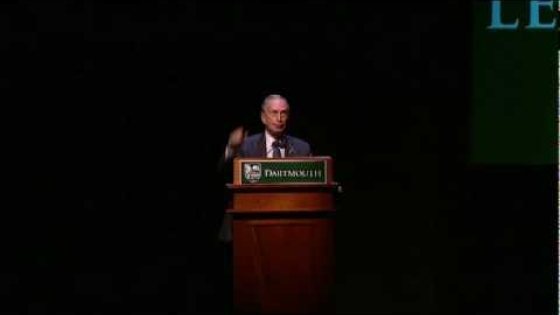 “Every one of my positions cuts out half the country,” he said. “I’m pro-choice. I’m pro-gay rights. I’m pro-immigration. I’m against guns. I believe in Darwin. It’s down to Diana, my mother, and me. And I’m not sure about my mother.” Bloomberg’s longtime companion Diana Taylor is a 1977 Dartmouth graduate and trustee of the college.

“If drafted I won’t run unless I really thought you had a chance to win,” he said. “No—no is the answer … I’m not running. Make that clear.”

“Arguably being the mayor of New York is the best political job in the world,” he added. “We have our own foreign policy, I’ve got the eighth biggest army in the NYPD, we’ve got a budget that’s bigger than most countries’ GNP.”

He also advised students to ask hard questions. “The conventional wisdom is to try and keep everyone happy. That’s never been the approach I have taken. I believe if you take on big controversial issues, people will respect you for it over the long run. It really is the only way you’ll get things done and make a difference.”

Describing immigration as “the single greatest problem facing our country today,” Bloomberg said, “There is no courage in Washington to face this issue.” He proposed a law granting a Green Card to anyone willing to start and maintain a business that employs 10 or more Americans.

“That would go towards two things that people want,” he said. “One, bringing diversity to the business community. And two, getting jobs for people, and Congress probably would listen to that.”

Bloomberg also stressed the importance of doing what you think is right, not necessarily what is popular. As one example, he cited opposition to a proposal for construction of a mosque two blocks from Ground Zero in New York.

“I happen to think this is a very appropriate place for somebody to build a mosque because it tells the world that America and New York City really believe in what we preach,” he said. “We all say freedom of religion. Well, it’s not just freedom of your religion, it’s freedom of everyone’s religion.”

Dartmouth President Jim Yong Kim said he invited Bloomberg to speak because “he is living proof that developing effective ‘habits of the mind’—persistence, independent thinking, and creativity, among others—beget success and allows an individual to make the world a better place.”

President Kim, who recently completed his first year in office, launched the lecture series to “supplement the classroom experience with real-life lessons on innovation, collaboration, and leadership.” Kim will speak about “habits of the mind” in the second lecture on July 29, 2010.