Michael Mastanduno Appointed Dean of the Faculty of Arts and Sciences

President Jim Yong Kim announced today that he has appointed Michael Mastanduno, a world-renowned expert in the study of international relations and an award-winning professor, to a five-year term as Dean of the Faculty of Arts and Sciences effective August 1, 2010. Mastanduno has been the Associate Dean of the Faculty for the Social Sciences since 2003 and previously served as director of the John Sloan Dickey Center for International Understanding. He is currently the Nelson A. Rockefeller Professor of Government. 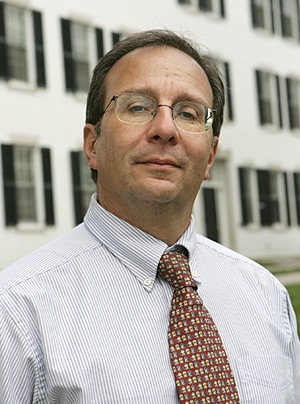 Michael Mastanduno, the Nelson A. Rockefeller Professor of Government, will oversee the humanities, sciences, social sciences, interdisciplinary programs, and graduate studies in his new role as Dean of the Faculty of Arts and Sciences. (photo by Joseph Mehling ’69)

“Mike Mastanduno epitomizes the Dartmouth scholar-teacher model—he is a preeminent academic who has mentored countless Dartmouth students,” Kim said. “I look forward to working with Mike to advance the work of Dartmouth’s faculty and the impact their research has throughout the world.”

Jonathan Crewe, the Leon D. Black Professor in Shakespearean Studies and chair of the Dean of the Faculty Search Committee, noted that the committee was enthusiastic about the selection of Mastanduno. “Mike has broad support from the faculty,” said Crewe. The committee felt strongly that, “Mike would be very effective at representing the faculty across all divisions. He is a highly experienced administrator with the intellectual distinction to enable him to lead the faculty in the larger College strategic planning process.”

Mastanduno said it was an honor to have been selected. “I have great respect for the Dartmouth community of scholars,” Mastanduno stated, “and I look forward to working with President Kim and my faculty colleagues at all levels and in every department to maintain and strengthen Dartmouth’s place as the premier institution for exceptional research and teaching.” He also expressed his gratitude to outgoing Dean Carol Folt for her outstanding and inspired leadership of the faculty over the past six years.

Mastanduno will oversee the humanities, sciences, social sciences, interdisciplinary programs, and graduate studies. These divisions comprise some 40 academic departments and programs with more than 400 faculty members. The Faculty of Arts and Sciences is one of four faculties at Dartmouth, the others being in the Dartmouth Medical School, the Thayer School of Engineering, and the Tuck School of Business.

His research and teaching focus in the areas of international relations theory, U.S. foreign policy, and the politics of the global economy. Mastanduno’s most recent work examines U.S. economic and security strategy in the post-Cold War world, and the implications of the rise of China for the world economy and the stability of the international system. He has published numerous articles in leading international relations journals and is the author of Economic Containment. He has co-edited seven books including International Relations Theory and the Asia-Pacific (Columbia), U.S. Hegemony and International Organizations (Oxford), and International Relations Theory and the Consequences of Unipolarity (forthcoming, Cambridge). Mastanduno lectures widely in policy and scholarly settings in Asia and Europe.

Mastanduno has held visiting appointments at the University of Tokyo and at the Graduate School of Economics and International Relations of the Catholic University of Milan. He is a member of the Council on Foreign Relations and has received fellowships from the Brookings Institution, the East-West Center, and the Salzburg Seminar. In 2008 he was a Distinguished Fulbright Lecturer in Japan. Mastanduno also served as assistant for Europe and Japan in the Office of the United States Trade Representative while on leave from Dartmouth in 1989. He is a recipient of Dartmouth’s Distinguished Teaching Award and the Karen Wetterhahn Memorial Award for Scholarly Achievement.

Mastanduno’s appointment follows an extensive search process by the Dean of the Faculty Search Committee. Following formation of the committee in May, committee members solicited and considered input from the faculty, holding open forums and meeting individually with numerous faculty and administrative leaders. President Kim worked closely with the committee from the initial launch of the search through to the final decision.