“You only get so many chances to play in the ‘majors,’ especially when you’re the golf pro at a 9-hole course in Lebanon, N.H., and the Dartmouth golf coach,” said Rich Parker, who is entering his seventh season as the men’s golf coach. 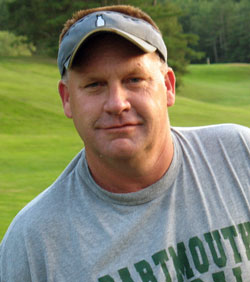 Rich Parker, the Dartmouth golf coach since 2005, is playing in a USGA Championship for only the second time in his career. (Photo by Bonnie Barber)

On July 29, the 50-year-old will play in one of golf’s “majors” for the first time in 20 years when he tees off at the U.S. Senior Open Golf Championships at Sahalee Country Club in Sammamish, Wash. The longtime head pro at Carter Golf Club qualified in late June for his first United States Golf Association (USGA) championship since the 1990 U.S. Open at Medinah Country Club near Chicago, where he missed the cut.

“The first time I went to the U.S. Open, I did everything wrong. I just practiced and practiced, and by the time the tournament started I was exhausted,” said Parker, a Lebanon native who has been playing golf since he was five. “I always wanted to get back to a U.S. Open. I felt like I would do it different if I ever got back.”

In the weeks leading up to the tournament, Parker practiced hard but tried not to overdo it. He played at Hanover Country Club on weekends, and at night after work he could be found driving balls on a small practice range created for him on the Carter course. Parker was often accompanied in the evenings by his 15-year-old daughter Virginia, a member of the Lebanon High School golf team, 12-year-old Anna, and his 9-year-old son Trey, a Little League player who stood out on the course and, incredibly, shagged his father’s golf balls out of the air with a baseball glove. “He’s a pretty good fielder,” said Parker, adding that his son’s catching saved them 30 minutes of picking up balls. “When you have to pick up your own balls it makes you hit a lot straighter.” 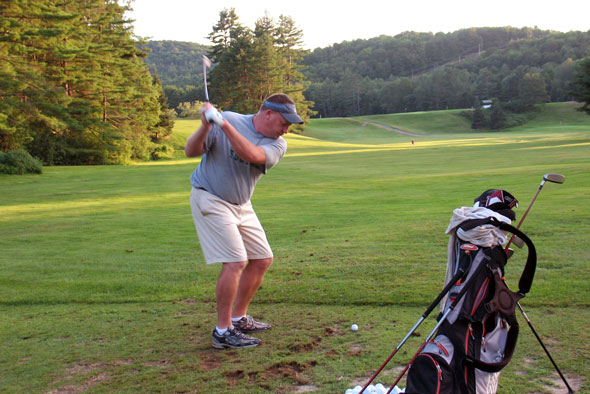 Men’s golf coach Rich Parker practices at Carter Golf Club for the U.S. Senior Open. He is the only college coach in the field of more than 150 top pro and amateur golfers, age 50 and over. (Photo by Bonnie Barber)

At the U.S. Senior Open he will be sharing the links with such legends as Tom Watson, Nick Price, and defending champ Fred Funk. But Parker, who played a round with two-time Masters champ Ben Crenshaw at a Champions Tour event in June, said he plans to stay focused. “You know, I’m just not going to pay attention to that stuff,” said Parker, who could only play two tournaments last summer due to a back injury. “I don’t watch anyone else swing when I play now. I’m trying to get into my own little world out there.”

But it’s been hard not to get caught up in the excitement as Parker has been flooded with congratulatory e-mails, texts, and phone calls to his weekly Saturday morning radio show, “The Sports Buzz,” on WTSL AM 1400. “My wife Barbara and family have been amazing, my boss at Carter, and everyone at Dartmouth have been great. I’ve been hearing from a lot of golf alums and it was nice that some of them came up to play in my benefit golf tournament,” said Parker of the Greenie Invitational on July 17th that raised $25,000 for needy Upper Valley families.

Dartmouth golfer Peter Williamson ’12 and his teammates knew their coach had hoped to qualify for some USGA Senior Tour events now that he’s 50. And they thought he had a good shot. “We’ve always known he was a great player,” said Williamson, a Hanover native who was the 2009 Ivy League Player and Rookie of the Year. “I think it will be a fun experience not just for him, but for all of those supporting him as well. I truly believe having a coach that understands competitive golf at the highest level through personal experience is an extra advantage for Dartmouth players. The simple strategies and pieces of advice he can offer to young players are more valuable than any swing lesson, swing thought, or practice drill.”

In his quest to treat this like any other golf tournament Parker has not scoped out the course on the tournament website. He knows it’s a narrow course, which suits his game since he’s not a long-ball hitter. “I’m a point A to point B guy,” said Parker. “I hit an average drive, and I’m a good iron player. The USGA’s obviously going to set the course up tough. I’m just hoping I’m not one of the guys it takes prisoner.”