Larry Polansky, the Jacob H. Strauss 1922 Professor in Music, has released a new CD entitled, The World’s Longest Melody, on New World Records. His sixth CD, this collection is comprised of pieces Polansky composed for the guitar over the course of 30 years. 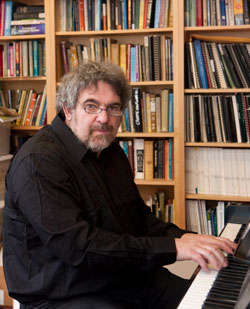 Most of the pieces are performed by ZWERM, a Belgian electric guitar quartet. Polansky says the director of this group of “young, virtuoso musicians,” Toon Callier, traveled to Hanover from Belgium to work directly with Polansky on many aspects of the music.

The piece for jim, ben and lou is the most ambitious composition on the CD. Polansky says this three-movement piece for guitarist, harpist, and percussionist, is “extremely difficult and highly experimental.” Written in 1995, for jim, ben and lou, was commissioned but had never been performed publicly until the Belgian group recorded it and toured it frequently throughout Europe.

In his only performance on the CD, Polansky plays the final piece 34 Chords (Christian Wolff in Hanover and Royalton), a solo for electric guitar. It was composed for longtime friend Christian Wolff, Strauss Professor of Music Emeritus and a professor of classics emeritus, who was celebrating 25 years at the College at the time. It’s a “short, quiet, quite difficult” piece, says Polansky, and one that he plays often.

Listen to this track and several others from Polansky’s CD at the New World Records website.