Kim drew from growing evidence in psychology, neuroscience, and sociology - and his own experiences - to suggest base habits like empathy are teachable, even for college-aged individuals. “We are in the business of building better human beings that can take on the world’s troubles and make them better,” Kim said.

When he first came to Dartmouth just over one year ago, Kim said he began to realize that “the 18-24 year-old period is far more important and plastic in terms of creating new connections than we ever thought.”

Kim referenced one study, by two former Dartmouth researchers, which showed the brain morphology of college students undergoes measurable changes, even within their first year of higher education. Because students are still developing, Kim said, college is the perfect time to foster these habits.

Kim pointed to 16 habits of the mind - including creativity, metacognition, persistence, and wonderment, which he called the “anti-cynicism pill” - that he said are critical for success and effectiveness in life.

“It’s just striking to me how many of these habits are things that everybody looking to employ or admit graduates is looking for,” Kim said.

Kim began by focusing on empathy, pointing to recent work by researchers who used fMRIs to show that empathetic concern may be tied to certain centers of the brain, and that activity in those centers changes over time.  The research, Kim said, may suggest that habits like empathy are, in fact, teachable.

While drawing from his own experiences in global health to explain the significance of empathy, Kim also discussed the importance of the humanities in developing empathic abilities. 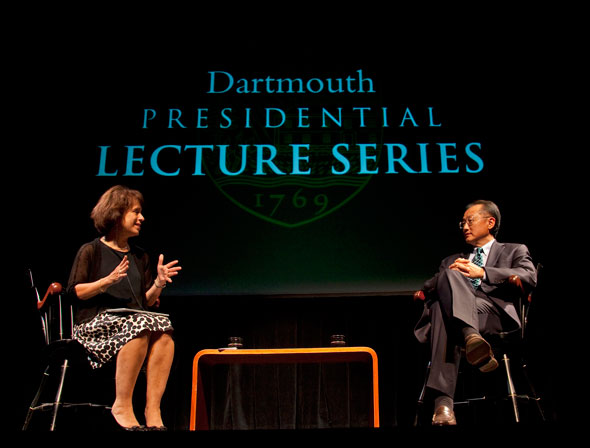 “So much of literature is about human empathy; so much of literature is about getting deeply into the mindsets of these characters ...” Kim said. “You can map many of these traits, habits of the minds, on the course work that we are already doing, especially in the humanities and arts, others as well, but especially I think, in courses in the humanities.”

Kim also focused on the habit of responsible risk-taking, discussing the back-and-forth between the brain’s pre-frontal cortex and nucleus accumbens, which together play a significant role in rewarding risky behavior and managing impulsivity.

“Doing things for others that might then reflect negatively on you, because it was a risk for you, is a good thing,” Kim said. “That is something that is not just sort of looking at the possibility of great reward and letting your nucleus accumbens take over, but it’s thinking hard about how to make the world a better place.”

Kim stressed that often the greatest outcomes come from finding the right balance between habits of the mind. “Taking another person’s idea, judging it to be insufficient, and stating your own opinion is something we teach you here, and it’s very important.  You have to marry that skill with the ability to at any time just stop and really try to experience the world from the shoes of others; and, if you do it well, the little thing on your functional MRI is going to light up brighter and brighter.”

Noting that the sophomore students, on campus for a required summer term, are two years away from graduating, Kim said, “You need to take your education into your hands right now. How are you doing with those 16 habits of the mind? Put them on your wall. Think about it. You’re at the height of possibility in terms of developing great habits of the mind.”