Ivy Schweitzer, professor of English and women’s and gender studies, has been awarded a $250,000 grant from the National Endowment for the Humanities (NEH) to support continued work on a digital edition and website that will provide public online access to the manuscript materials of Samson Occom and his circle. 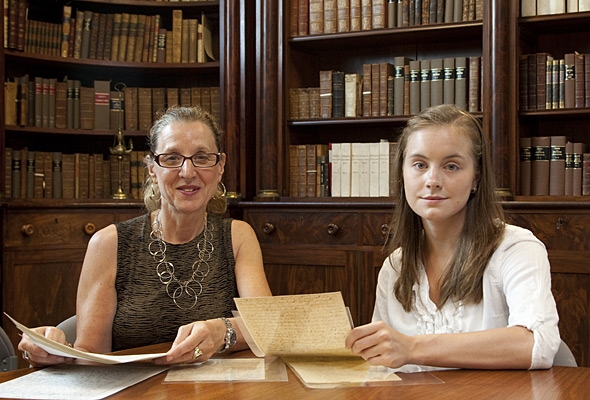 Professor Ivy Schweitzer (left) with Nina Maja Bergmar ’11, one of the students helping to transcribe and format Samson Occom’s letters for the website. (Photo by Joseph Mehling ’69)

A Mohegan Indian and student of Dartmouth College founder Eleazer Wheelock, Occom’s works are the largest surviving archive produced by an American Indian before the early 20th century, and much of this collection is housed in Dartmouth’s Baker-Berry Library and Rauner Special Collections Library. The three-year grant is part of the NEH’s Scholarly Editions program, which provides opportunities for the preparation of print and digitized editions of texts and documents that are currently inaccessible.

Schweitzer began developing the digital Occom Circle Project in fall 2006, when she was awarded a Dartmouth Center for the Advancement of Learning fellowship. She worked with College Archivist Peter Carini, Educational Technologies Specialist Barbara Knauff, and the Dartmouth Libraries to produce a website for digitized works by Occom so that scholars, teachers, and students would have online access to his papers.

Occom was the most important Indian writer in North America in the 18th century and also corresponded with a wide circle of friends and acquaintances he met in his travels, which included a Dartmouth fundraising tour of England and Scotland. Schweitzer said the NEH grant allows her to broaden the scope of Occom Circle and incorporate additional rare and historical documents.

“Our goal is to reproduce and preserve through facsimiles and transcriptions a large quantity of holograph materials by Occom and also pertaining to the circle of his associates and activities. This includes documents from Eleazar Wheelock’s Charity School, the founding of Dartmouth College, Occom’s fundraising tour, his association with other public figures of the day, and his tribal advocacy,” says Schweitzer, who is also collaborating on the project with Dartmouth’s Native American Studies Program and the Mohegan Tribe. “The range of these materials will enable even the casual user to better appreciate the cultural richness of Occom’s milieu.”

Schweitzer notes that Occom Circle is an example of the vitality of the digital humanities at Dartmouth. “The project uses digital technology to address the challenges we in the humanities face as scholars and teachers trying to bring a richer and more accessible account of the past to life,” she says. “These documents will be preserved and accessible in digital versions that will have the added advantage of facilitating retrieval and research in ways we probably cannot yet fully appreciate.”

The grant begins in January 2011 and runs through January 2014. Schweitzer will be assisted on the project by several Dartmouth undergraduates. Val Arvidson ’08 and Lisel Murdock ’09 did the initial transcriptions. The late Cody Lavender ’10, who was Schweitzer’s presidential scholar, also laid much of the groundwork in the summer of 2009 before his untimely death in December 2009. Mitch Davis ’11 worked on the project in summer and fall 2009, and Nina Maja Bergmar ’11 has assisted with research this during 2010 spring and summer terms.